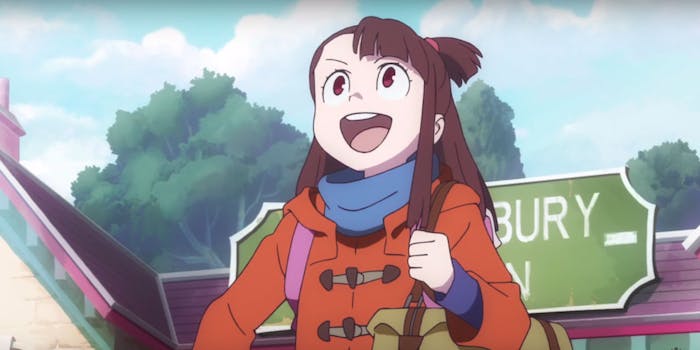 Let 'Little Witch Academia' cast a spell on you.

There’s something magical about Little Witch Academia. No, not just the wand-waving, incantations, and flying broomsticks. This anime series about a witches’ academy called Luna Nova brims with joy and energy, from the vibrant worldbuilding to the headstrong heroine. It’s little wonder that fans adore this thrilling coming-of-age tale.

Little Witch Academia is one of Netflix’s first forays into anime licensing and probably one of the best picks it could have made. The familiar setting and plot make it accessible to audiences worldwide, especially those of us weaned on Harry Potter and Hogwarts. It’s recognizably anime, but also lacks many of the qualities that may be off-putting or confusing to newcomers, making it a perfect entry point to the medium.

The series tells the story of Atsuko “Akko” Kagari, a girl who decided to become a witch after being inspired by a magic show as a young child. She looks up to the performer, Shiny Chariot, and enrolls at the magic school Luna Nova, despite having no other magical background. There, she befriends her roommates, Lotte and Sucy, and declares the top student, Diana, her rival.

Which Little Witch is which?

The first incarnation is a short movie that came out in 2013 as a project to train young animators at the newly formed Studio Trigger. It introduces Luna Nova, Akko, and most of the cast and the series’ core concepts. Despite Akko’s lofty ambitions, she struggles to keep up in class and lacks aptitude for witchcraft. At a school scavenger hunt, she finds the Shiny Rod that Shiny Chariot once used, which may be the only chance of defeating the dragon that Diana unleashes.

The short movie caught the anime community’s attention for its energy, engaging setting, and thrilling action. It was released streaming on several sites, including YouTube and Japan’s Niconico Douga service, and racked up thousands of views. Because of that reception, Trigger produced a sequel, The Enchanted Parade, and was even able to extend its runtime because of a successful Kickstarter campaign. It premiered at Anime Expo in Los Angeles in 2015.

A direct sequel to the first movie, The Enchanted Parade expanded the world around Luna Nova and introduced three more young witches: Amanda, Constanze, and Jasminka. It depicts the relationship between Luna Nova and the nearby town as fraught, as the witches must put on an annual parade reenacting the town’s tradition of witch hunting. Akko, not one to give in to tradition for tradition’s sake, wants to transform the parade into a joyful celebration that displays how wonderful magic can be, similar to the Shiny Chariot show she saw as a child.

The most recent release is the 25-episode TV show, which premiered on Japanese TV in January 2017 and starts from scratch with Akko entering Luna Nova for the first time. Overall, the setup is similar to the first movie, but with some key differences: Akko inadvertently summons the Shiny Rod in the dangerous Arcturus Forest outside the school through her faith that she will become a witch. While the setting and key cast members are the same, the show gives the Little Witch Academia space to fully explore its core concepts.

Netflix splits the Little Witch Academia TV series into two seasons, based on the structure of anime airing in Japan. The seasons roughly follow the calendar, and every three months a new season starts. The first 12 episodes make up the first season, and the second season is 13 episodes.

The first season is episodic, focusing on the misadventures of Akko, Sucy, and Lotte. Akko, not having any magical background, struggles to catch up in her classes, and her brash personality and disregard for the rules get her into trouble constantly. Sometimes she manages to fix things with savvy, sometimes through the help of her friends, and sometimes through sheer dumb luck.

Character-focused episodes keep things from getting repetitive, filling out the student body of Luna Nova with a variety of colorful personalities. Soft-spoken Lotte seems like the mature member of the trio, but she turns out to be a total nerd for a long-running book series inspired by real-world Twilight. A journey into Sucy’s mind illustrates the potential worlds that exist inside of teenage girls.

The second half builds into a more cohesive plot, bringing together all the background elements that started percolating in the first half. Many of the secondary characters fall by the wayside as the focus turns to Akko’s relationship with her mentor Ursula, the Shiny Rod, and magic’s slow weakening in the face of technology. By the end, all of the elements that make the series great come together for a satisfying, heartwarming conclusion.

The source of Akko’s power is stubbornness

One of Akko’s greatest obstacles is her lack of a natural gift for magic. Most of the other girls have a family tradition or specialty, like Lotte’s ability to commune with the spirits in objects or Sucy’s love of poison and mushrooms. Her chosen rival, Diana, comes from one of the top witch families. Akko, on the other hand, can’t even fly on a broomstick.

Akko is brash, stubborn, looks before she leaps, and often overconfident. No one believes in her at the start, but her unwavering faith in herself and her desire to emulate Shiny Chariot keep her going. She’s so insistent on her own potential, the others start to believe in her as well despite themselves. And as she goes, Akko does get better and better at magic. It all fits with the show’s central theme: a believing heart is your magic.

Little Witch Academia is great for families and anime newcomers

One of biggest things that makes Little Witch Academia a great introductory series is that it is, really and truly, a family show. Japan has different standards for what’s appropriate for kids, which means that even shows aimed at kids 10 and under can have moments U.S. parents would find questionable. Few children’s series make it to air completely untouched, with occasionally hilarious results. Just look at Yugi-Oh’s invisible guns.

Little Witch Academia offers a great heroine who works hard for everything she achieves and a mostly female cast. The cast is diversely represented and unsexualized, and while things can get intense, the violence is mild at best. The series has warmth, heart, and humor to spare, and intelligent writing to keep older audiences interested as well.