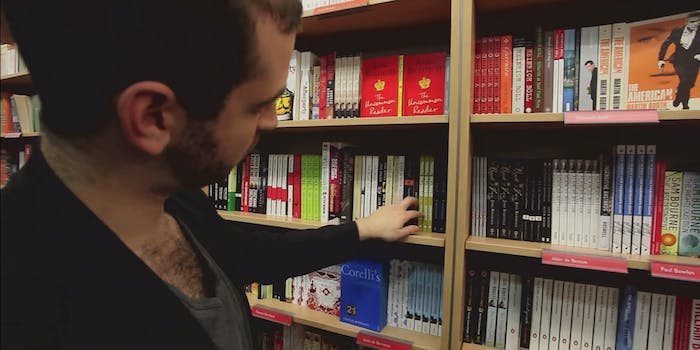 "I spanked her bottom and cranked up the tunes."

The Literary Review is an esteemed British magazine that has been reliably critiquing fiction for 35 years. This week, to illustrate its ability to distinguish bad writing from good writing, the magazine has been tweeting out hilariously awful sex scenes from real published fiction.

her nipples are swollen, her birth passage sucks and swallows in its hunger for his seed. (2/2) #BadSex

For the last two decades, Literary Review has issued a Bad Sex in Fiction award, highlighting what its editors consider the worst sex of the year out of all the fiction it has reviewed or considered reviewing. This year’s shortlist includes literary giants like Haruki Murakami, along with a Pulitzer Prize winner and two recipients of the Man Booker Prize.

What’s especially notable about most of the nominees who wind up on @Lit_Review’s shortlist, and its accompanying #BadSex hashtag, is that most of the authors are esteemed male writers whose works have been hailed as impressive entries in the literary canon.

There was a call for 2002, from the ranks. So, herewith, tweets, utterly out of context, from the 2002 shortlist of #BadSex.

Authors include: Banville, Barker, Eugenides, Coleridge, Self…. and Ethan Hawke.

The #BadSex tweets’ male-focused send-ups of “romance” writing come on the heels of Princeton-educated author Jodi Picoult’s strident interview in the Telegraph, in which she discussed seeing her work constantly dismissed. Picoult’s long string of bestsellers have dealt with issues like domestic violence, gun control, and gay rights, but they are usually marketed as “romance” books or “women’s fiction.” Meanwhile, writers like Jeffrey Eugenides, whose books feature overtly romantic plots, are considered purveyors of highbrow literature.

This shouldn’t be news to anyone familiar with the publishing industry. Writers like Jonathan Franzen and John Green consistently overshadow their female counterparts, which has led to considerable controversy. Nonetheless, the annual #BadSex tweets offer a helpful (and visceral) reminder that male writers whose works aren’t called “bad romance” write about sex a whole lot—and do so very poorly. Take this quote from the work of an unnamed award winner:

They were like two flamingos, each attempting to filter the nutriment out of the other with great slurps of their muscular tongues. #BadSex

Then there’s this description of sex that actually sounds more like it belongs in a dramatic tale of difficult maritime passage:

It’s just like we are back on our boat bed again, and we are making waves. As she rocks, the waves pass from her skin across mine. #BadSex

Her little belly shimmies under my touch, more waves that push my hands up to the sealskin tips of her breasts #BadSex

This passage, meanwhile, skips the seals and jumps the shark:

Then she swivelled right way up again — such an agile girl! — and balanced the length of herself along me, a sprat riding on a shark #BadSex

Some scenes illustrate why the writer is probably terrible in the sack:

Halfway through our slow-motion love-making she squirmed out from under me and made me turn on my back, (1/3) #BadSex

and would not let me go until I had spent myself against the burning bud of her epiglottis. (3/3) #BadSex

He is aware that the pounding is punctuated by a rhythm of buttock-slaps and regular full-throated hunting cries. #BadSex

I feel something splat against my chin; there are spongy, salty, strands between my lips. The pressure between my legs has gone. #BadSex

Other descriptions remind us that being well-read does not automatically equal being well-written:

I reached under her. I brought her up to me. And then my body, like a cathedral, broke out into ringing. #BadSex

The hunchback in the belfry had jumped and was swinging madly on the rope. #BadSex #belfry

Then there are the totally random passages:

I had reached the moment my life had been waiting for. I was going to be a father & a husband.
I spanked her bottom & cranked up the tunes.

‘So you had sex with spacemen for three years?’
‘Yes. I used up three silicon-lined vaginas.’#BadSex

Literary Review‘s Twitter account also shared a passage by 2007 Bad Sex prize winner Norman Mailer. Though the entire passage didn’t make it into the tweeted version, we found it in his novel The Castle in the Forest:

‘Are you all right?’ she cried out as he lay beside her, his breath going in and out with a rasp that sounded as terrible as the last winds of their lost children.

‘All right. Yes. No,’ he said. Then she was on him. She did not know if this would resuscitate him or end him, but the same spite, sharp as a needle, that had come to her after Fanni’s death was in her again. Fanni had told her once what to do. So Klara turned head to foot, and put her most unmentionable part down on his hard-breathing nose and mouth, and took his old battering ram into her lips. Uncle was now as soft as a coil of excrement. She sucked on him nonetheless with an avidity that could come only from the Evil One – that she knew. From there, the impulse had come. So now they both had their heads at the wrong end, and the Evil One was there. He had never been so close before.

The Hound began to come to life. Right in her mouth. It surprised her. Alois had been so limp. But now he was a man again! His mouth lathered with her sap, he turned around and embraced her face with all the passion of his own lips and face, ready at last to grind into her with the Hound, drive it into her piety.

Feel free to trot out this passage the next time someone you know starts to mock romance novels, young-adult novels, or any other genre fiction written by women. We’re pretty sure no woman on Earth has ever described a penis as “a coil of excrement,” or described 69ing as an act of demonic possession.

We’ll take fangirls writing Twilight or One Direction fanfic over this crop of esteemed literary dudes any day.