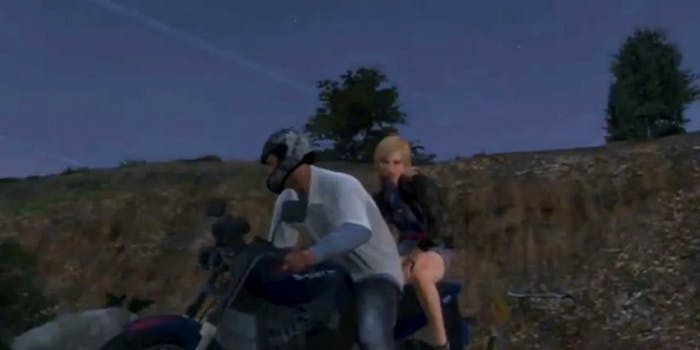 TMZ points out several parts of the game where Lohan could claim she appears, starting with the cover. The bikini model on GTA’s box and advertisements has been compared to everyone from actress Yvonne Strahovski to YouTube star Justine Ezarik to the one and only Kate Upton.

Could Lindsay really be the inspiration for the famous bikini babe?

Probably not. It’s already been confirmed that the image is based on model Shelby Welinder. Welinder even produced a copy of her invoice from Rockstar to prove it.

But a couple of characters in the game itself are significantly more Lohan-esque. One is Lacey Jonas, a vain celebrity who needs help escaping the paparazzi. The other lives in a building that TMZ claims resembles Hollywood’s famous Château Marmont, where Lohan often stays. The player’s mission? To tape her having sex.

TMZ has posted gameplay footage from the Lacey Jonas mission. Is she Lindsay? Decide for yourself.

However this turns out, Lohan is certainly going after some deep pockets. GTA V holds the Guinness World Record for fastest entertainment property to gross $1 billion.