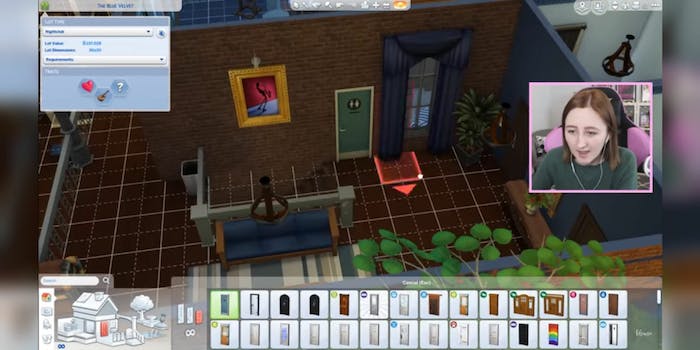 This YouTuber made ‘The Sims’ bathrooms gender-neutral, and fans can’t get enough

Shouldn't the base game have come with these?

19-year-old Kayla Sims has been making videos about EA’s life simulation game The Sims since 2015.

In those years, she has made content related to just about every facet of The Sims, from critiques to instructional videos and speed builds. In a recent video, Sims broke down her newest update to the game, which comes with gender-neutral bathrooms in every town.

In the video, Sims delves into the work she did to completely renovate The Sims 4. She created new homes, all new households and even changed the pre-existing lots. At about the 11:30 mark, Sims talks about her decision to make the bathrooms gender neutral.

“I went in, and I actually changed every single bathroom that was gendered to be gender neutral,” she said. She lists several reasons for her decision to do so. “It’s really irritating when you have gendered bathrooms in The Sims because when you have the walls cut away, you can’t see which one’s which.”

“It’s irritating, right? So I went in and I changed them all to look like this, or to have the gender-neutral doors. It’s also a really easy way to make something more accessible, and also to make something, just, more inclusive.”

In the video, Sims also laments the lack of color options on the single gender-neutral bathroom door, as compared to the gendered doors. “EA, if you want to give us a gender-neutral version of this door that would be great. Just saying.”

Followers of Sims were delighted at her idea to remove the gendered doors from all of the lots in the game. “It’s really cool of you to go back and remove gender restrictions on bathrooms. It’s such a little thing but it makes the game so much more inclusive and a lot easier to play,” YouTube user Kittylubba wrote.

Other users were in agreement. “Omg the gender bathrooms are the woooorst! So glad you fixed it,” user Isabella Shelburne wrote. Another user, who goes by SpaceChaser, said, “gendered restrooms shouldn’t be an irl thing and especially not in the sims it is very annoying.”

Sims makes an excellent point when she notes that gendered bathrooms can be irritating in gameplay. In a game that presents flexibility when it comes to gender and clothing options, it seems like non-gendered bathrooms should have come a long time ago.

The Daily Dot reached out to Sims and will update the story should she comment.