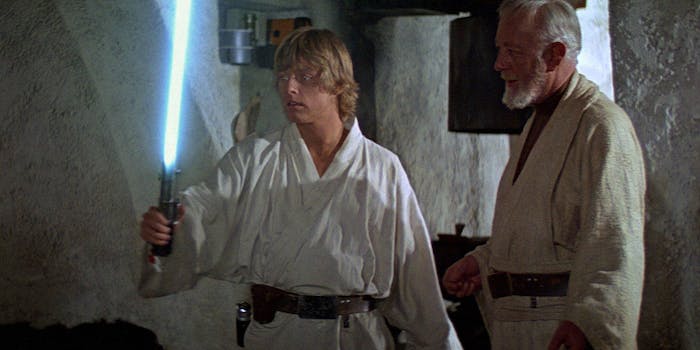 It lights up, makes noises, and is safe to use for 'real' lightsaber duels. This thing is going to sell like hotcakes.

There are already tons of lightsaber toys on the market, but one Kickstarter has found the perfect niche audience: live-action roleplayers who want to have real, safe lightsaber duels.

While there are plenty of rigid lightsaber replicas out there, LARPers need something that can be used for actual (fake) combat. Foam swords are traditional, but for obvious reasons it’s kind of difficult to make a foam lightsaber look realistic. At least, it was until now.

French-Canadian LARP gear manufacturer Calimacil has put together a very convincing Kickstarter campaign for foam “LEDsabers” that light up and make lightsaber noises. You can use them to fight without worrying about breaking the saber or hurting anyone, and you can change the blade’s color with a Bluetooth app.

Our favorite feature is the saber’s motion-sensitive sound effects, which allow the saber to make different noises for movement, impact, and prolonged contact with a solid object.

The Kickstarter campaign still has three weeks to go, but it’s clearly a winner. Who wouldn’t want a realistic lightsaber that you can use for real-life duels?