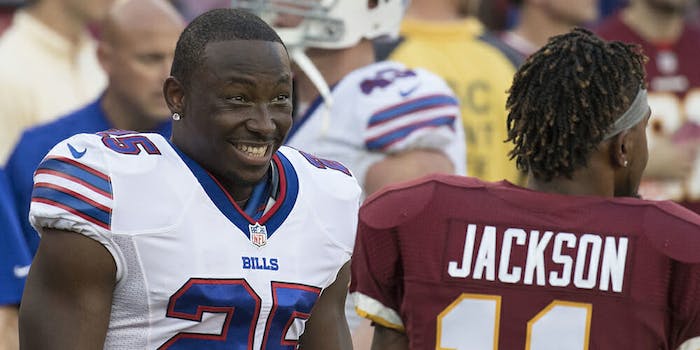 NFL player LeSean McCoy spoils ‘Avengers: Endgame’ for all of his followers

Editor’s note: This article does not contain spoilers for Avengers: Endgame.

Buffalo Bills running back LeSean McCoy just posted a major spoiler for Avengers: Endgame all over social media—and his followers are not happy.

McCoy apparently got early access to the film and watched it on Friday with his son, aka Lil Shady. As they watched, McCoy posted his reactions to Twitter—including his reaction to what’s arguably the biggest spoiler in the whole film. He also posted a reaction video to Instagram, writing the spoiler in the caption and repeating it in the video.

McCoy has 732,000 Twitter followers and 505,000 Instagram followers. Understandably, thousands of them were furious that McCoy dropped spoilers all over his timeline without any warning.

Twitter coming together to shit on LeSean McCoy for spoiling Endgame is beautiful and powerful. @Twitter DO THE RIGHT THING AND SUSPEND THIS MAN.

The NFL should suspend LeSean McCoy for the entire 2019 NFL season for spoiling Avengers: Endgame. I hope the Bills don’t win a single game this season. pic.twitter.com/dBxRZdCz63

I WANT EVERY DEFENSIVE PLAYER IN THE NFL TO DESTROY LESEAN MCCOY EVERY GAME NEXT SEASON!!! I EXPECT NOTHING LESS!!! pic.twitter.com/UvpjdeX63T

But many others were just entertained.

Despite the plea from the Russo Brothers, who directed Endgame, not to share the movie’s spoilers, it seems inevitable that more and more will slip out following the U.S. premiere on Friday. Hopefully, you can avoid McCoy’s posts until you get to see it.