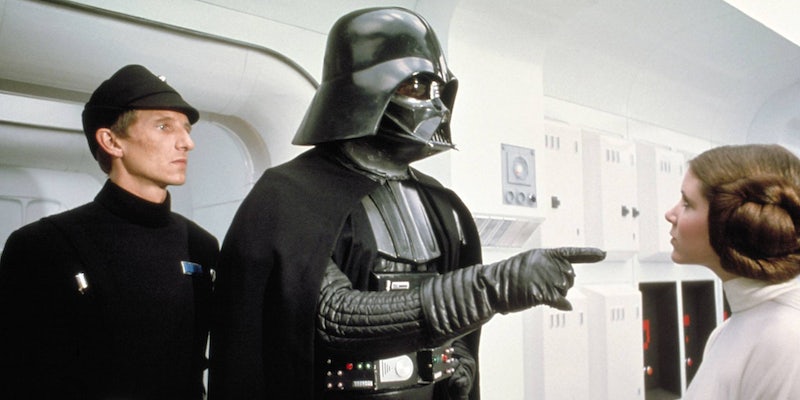 Photo via A New Hope/Star Wars

Now we know why Leia wound up near the 'Rogue One' crew on Scarif.

Opinions are divided over Leia‘s role in Rogue One. Was the CGI convincing or distracting? And did her presence make sense in the context of A New Hope, which begins with Leia assuring Darth Vader that her ship is on “a diplomatic mission to Alderaan,” minutes after Vader watched Rebel soldiers pass on the Death Star plans?

In a new episode of the Star Wars Show, we got some background detail on what Leia was doing at the battle of Scarif in Rogue One.

Leland Chee, Pablo Hidalgo, and Matt Martin all work for the Lucasfilm Story Group, the behind-the-scenes masterminds of the Star Wars franchise. Among other details—like the fate of that “Hammerhead” ship during the battle of Scarif—they explained Leia’s presence with the fleet.

As we already know, Leia’s real mission was to find Obi-Wan Kenobi. Traveling in her ship the Tantive IV, she was accompanied by Admiral Raddus (the guy who looks like a cross between Winston Churchill and a frog) as protection, due to her role as the public face of the Rebel Alliance.

“Then the news of Scarif came in, and that was deemed more important,” explained Pablo Hidalgo. So Raddus and his warship took a detour to Scarif to help the main characters of Rogue One, and the Tantive IV came with them.

As Hidalgo points out, the Tantive IV’s diplomatic status was both a blessing and a curse. Leia couldn’t join the battle in a consular ship, but the Tantive IV represented a kind of legal protection like diplomatic plates on an ambassador’s limo. So Leia wound up in the perfect position to get her hands on the Death Star plans and be easily tracked down by Vader, but she could still play innocent by arguing that she really was on a diplomatic mission all along.