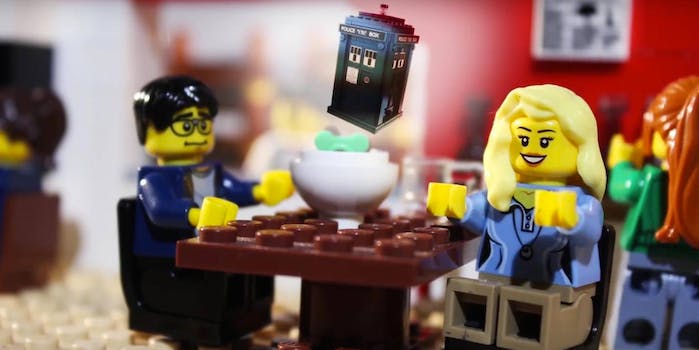 When animators get hitched.

Before tying the knot this week, animator Kevin Ulrich shared his unique love story in an adorable stop-motion Lego video. The resulting video is only about a minute long but is so sweet, you’ll probably find yourself smiling in just a few seconds.

Ulrich posted the short video on the Brotherhood Workshop YouTube channel Monday. It shows how the couple first met, started dating by deciding to “do something stupid,” and eventually became engaged. Throughout viewers see their nerdy hobbies. Ulrich told the Daily Dot in an email that ever since he decided to propose he wanted to create such a video to surprise his soon-to-be-wife Celina. Since they worked together, Ulrich couldn’t create it without her seeing so he put it on the back burner. As he wrote:

“In the weeks leading up to my wedding, Celina started asking about a video saying ‘Wouldn’t it be great if you did a Lego video about us? You don’t have to. But if you wanted to I would love it!’ So I spilled the beans and told her I had been planning to, but had no way of keeping it a surprise. … It just so happened that this admission lined up with a week of dead time in my job, waiting for approvals on scripts and animations. So I told Celina I would make the video of our love story. At first she wanted to make changes to my script, but I told her to trust me and that she would like the final product. And she did. She loved it.”

Looking back at their two years together, the pair discussed which moments to include in the video.

“Some were obvious, like the proposal, the wedding, the first kiss, and asking her out in a tree. Others were less clear, like the aquarium, the Ostrich farm, and the Ice Sculptures,” Ulrich said.

Ultimately they decided on the moments to include by creating a criteria where they asked themselves if the moment would be difficult to build, was a meaningful experience to them, could be shown “in a humorous or entertaining manner,” and if it was “visually distinctive and fun to look at.” Completing the animation took Ulrich about 70 hours over a week.

While the video may have many nerdy references, their wedding will be more or less buttoned up.

“There are some fun little references we will be having,” Ulrich said. “Our first dance will be a Disney song (‘At Last I See The Light’), and the last song of the night will be ‘Everything is Awesome!’ But we’ve chosen to keep it subtle and go for classy more than nerdy. After all, we have the rest of our lives to be nerdy together.”

It sounds like the perfect way for this couple to celebrate their fateful “stupid decision!”