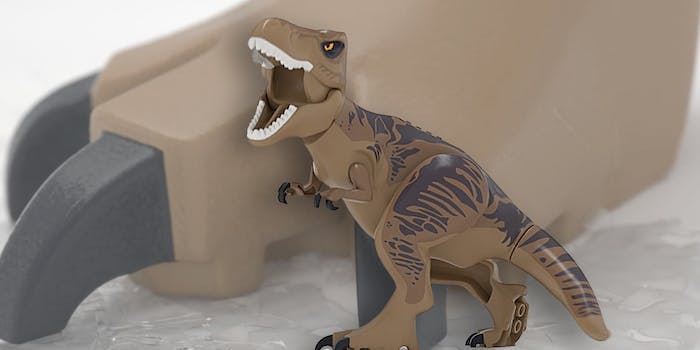 Hold onto your butts—and your jaw.

Fans might want to hold onto their butts (and their jaws) for this.

We’ll have to wait until Jun. 12 to see how Chris Pratt and his raptor squad really get along in Jurassic World, but for the kid inside all of us, we have something else to look forward to: the Lego rendering of the Jurassic Park series.

Promising to take you through the entire trilogy as well as the newest movie, there’s bound to be plenty of shenanigans and Lego dinosaurs involved.

While going through the progression of Lego Jurassic World won’t allow you to play through anything in the new movie for some time, Pratt excitedly showed off the Lego version of Owen, his Jurassic World character, noting that “if anyone asks I’ll be at home playing with myself.”

This time last year, Pratt was merely a Lego who became a guardian of the galaxy. Now as a dinosaur herder, he’s a Lego again. How full-circle of him.