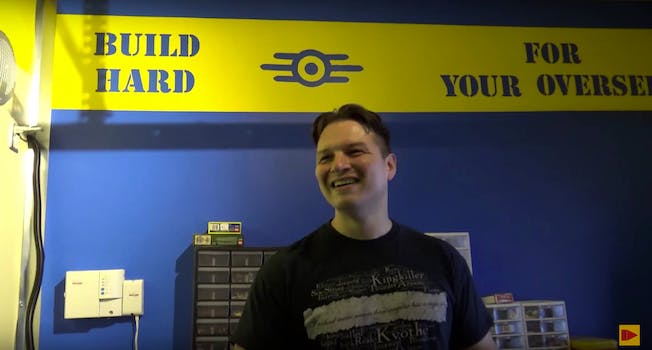 Just add a German shepherd named Dogmeat, and this vault is perfect.

One man combined his two nerdy passions—Lego and Fallout—to create one of the coolest mancaves we’ve ever seen.

The guys over at the Beyond the Brick YouTube channel caught up with Lego enthusiast David Frank for a tour of his incredible garage hideaway.

Frank is known for his epic Lego builds, including this massive display at BrickCon in 2015. But his true magnum opus is this shrine to bricks and video games.

The video provides a pretty thorough tour, but the highlights are the backlit wall of Lego bins, a staggeringly huge TV, the multiple power circuits so nothing slows down (or melts down for that matter), and an awesome ’50s-style office chair that fits right in with the Fallout motif. Frank revealed he picked it up off Craigslist for $40.

Frank spent five months on the construction of the vault, but he’s not finished yet. The finishing touches will include metal sheeting for the ceiling, rounding out the post-apocalyptic vibe.

And that’s a good thing, because if the bombs start dropping, we’ll definitely be heading to Frank’s house to wait out the nuclear winter in style.