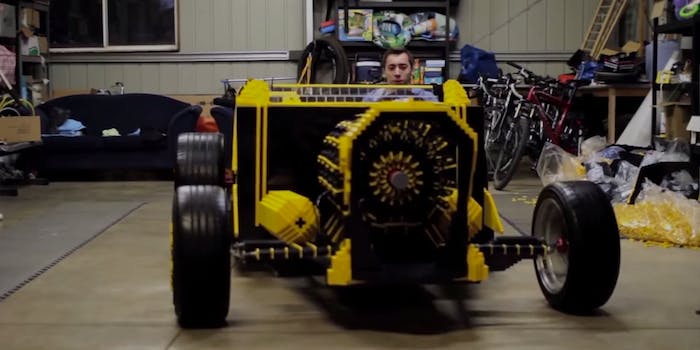 We're looking back to our regular Lego cars with envy.

An imaginative and entrepreneurial inventor has built the Lego car of our collective dreams.

Raul Oaida had already built a jet-engine bike and a tiny spaceship out of Lego by the time he was a teenager. As he got older, however, the Romanian man set his sights on something even bigger.

Oaida teamed up with entrepreneur Steve Sammartino, and together they raised $20,000 through Twitter and debuted a hot rod made entirely out of Lego in 2013. All of our normal-sized Lego cars pale in comparison to this thing.

Two years later, Oaida is opening up about spending his teen years building and inventing things like the Lego car.

The massive creation features than 500,000 pieces, runs on compressed air, travels 20 kilometers (12.4 miles) per hour, and has a piston-driven engine with 256 cylinders, which he said was the hardest part to build.

The car could fall apart at any moment, he said, but he could always get more Legos to keep the car in tip-top shape.

So why did he do it?

“Well,” he asks in the description of this YouTube video, “why not?”

That’s as good an answer as any.