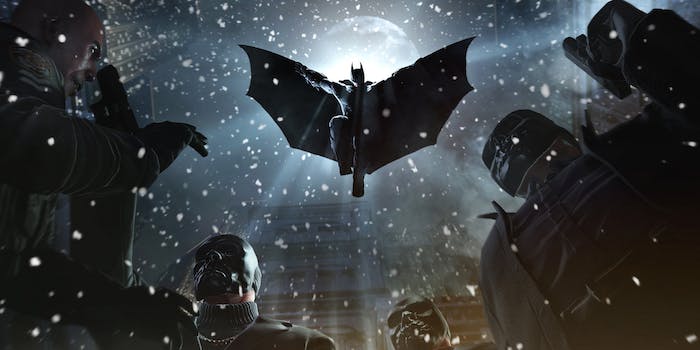 Will the LEGO Batman movie give the Dark Knight a smile?

As any Batman aficionado knows, the caped crusader hasn’t exactly had his share of fun times, what with losing his parents, living through the (occasionally temporary) deaths of several girlfriends and his lovechild, and being an overbearing father figure to a series of dysfunctional bat-children.

Still, if anything can give the Dark Knight a sunny disposition, surely it’s life in the land of the LEGO movie, where everything is awesome—right?

That’s what the sequel to last year’s hit animated film aims to explore, according to an interview with producers Phil Lord and Christopher Miller.

“I think the movie is really exciting ’cause it’s about, ‘can Batman be happy?'” Lord told MTV’s Josh Horowitz at the annual National Board of Review dinner. Lord and Miller directed and wrote the screenplay for 2014’s The LEGO Movie, which grossed $470 million at the worldwide box office.

“There is no quick answer,” added Will Arnett, whose cameo as the gravelly-voiced hero was a hit with fans.

Lord added that Batman “is the ultimate in white people problems.”

“He’s just like, oh, I’m so rich and handsome and women like me, and I’ve got a McLaren [a reference to British sports car McLaren and designer Gordon Murray, who designed a Batmobile prototype; McLaren also custom-created a Batmobile-inspired sports car for an anonymous billionaire]. Ohhhhhh! Something about my parents!'”

While Batman’s hilariously privileged existence, combined with his excessive manpain, are a core part of the character’s identity, the combination also makes the concept of genuine emotional catharsis that much more interesting. If Batman can find happiness after all these decades, maybe there’s hope for the rest of us—even other perennial sad sacks like Wolverine.

Because the LEGO movies feature a mix of stop-motion, CGI, and actual LEGOs that make them incredibly complicated to animate, we still have to wait two years to know what fortune has in store for Batman. In the meantime, skeptics are already hailing Christopher Nolan‘s house of Batpain as the enduring vision of Batman for our times.

We’re content to wait for the peppy animated version.