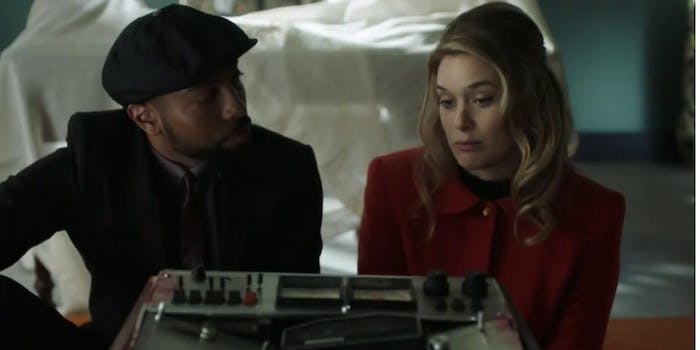 Recap: ‘Legion’ takes a trippy visit to the astral plane

This week’s episode demonstrates why ‘Legion’ is one of the smartest ‘X-Men’ adaptations to date.

Is there any show that wouldn’t be improved by including a dance scene with Jemaine Clement of Flight of the Conchords? I doubt it. Legion just introduced him as Melanie Bird’s comatose husband Oliver, a role that allows us to revel in his sheer Jemaine Clement-ness: a Nietzsche-quoting Beat poetry fan in a white suit, trapped inside a giant ice cube on the astral plane.

By focusing on David Haller’s psychic powers and unreliable memory, Legion creates a divide between the bodies and minds of its characters. In this episode, that meant watching David meet a psychic projection of Oliver Bird, while their bodies remained unconscious inside the Summerland mutant stronghold. (Oliver is actually sleeping in an antique diving suit inside some kind of ice chamber, for reasons that have not been explained.)

Syd is living proof of this split between mind and body, a soul who exists beyond the knowable biology of neurons firing in a human brain. She swaps bodies with anyone she touches, and this week we discovered that the two Carys share a loosely related power.

The main Cary is Melanie’s second-in-command, a middle-aged man who wants to study David’s brain. But he shares his body with a young Native American woman named Cary, who only steps out when things get exciting. The rest of the time, she leaves the male Cary to take care of boring everyday activities. Her interactions with Syd were a satisfyingly thoughtful X-Men concept, examining how their respective superpowers shaped their identities. The two Carys find comfort in their shared life, while Syd’s power simultaneously isolates her from everyday society, and helps her find a new home with David and the other mutants.

Through these examples of shifting bodies and identities, we’re invited to think harder about David’s unreliable mind. We now know that some of his “visible” memories are false, including the fact that his friend Lenny (Aubrey Plaza) was actually a man named Benny. Are Benny and Lenny the same person, somehow altered by David’s reality-warping abilities? Or are they different people from different periods of David’s life, conflated within his confused subconscious?

We’ve now reached the halfway point in Legion’s eight-episode season, and I’m curious to see if it sticks the landing. Even when the show follows a relatively conventional storyline—Syd and Ptonomy investigating David’s past, for example—much of its energy goes toward atmosphere and symbolism over traditional action. It’s not as emotionally coherent or driven as Hannibal, one of its most obvious influences, but it never fails to be interesting.