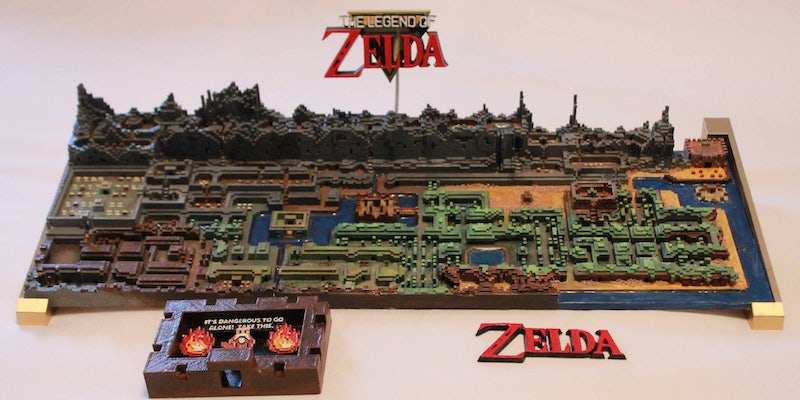 He just wanted some extra spending cash to buy Christmas present for his kids.

Jeff Frazier was not prepared for the shockwaves he inadvertently sent through the internet in December with his 3D-printed version of the original Legend of Zelda overworld map.

In fact, he was surprised anyone wanted it at all. The Springfield, Missouri, man built the intricately detailed 3D map as a hobby project that spoke to his nostalgia for old-school gaming. He said he planned to keep it on a bookshelf, but Christmas was approaching and money was tight. He decided to sell the model on Craigslist for $100 to have a little extra to spend on his kids.

If you spend any amount of time with nerds on the internet, you can guess what happened next. 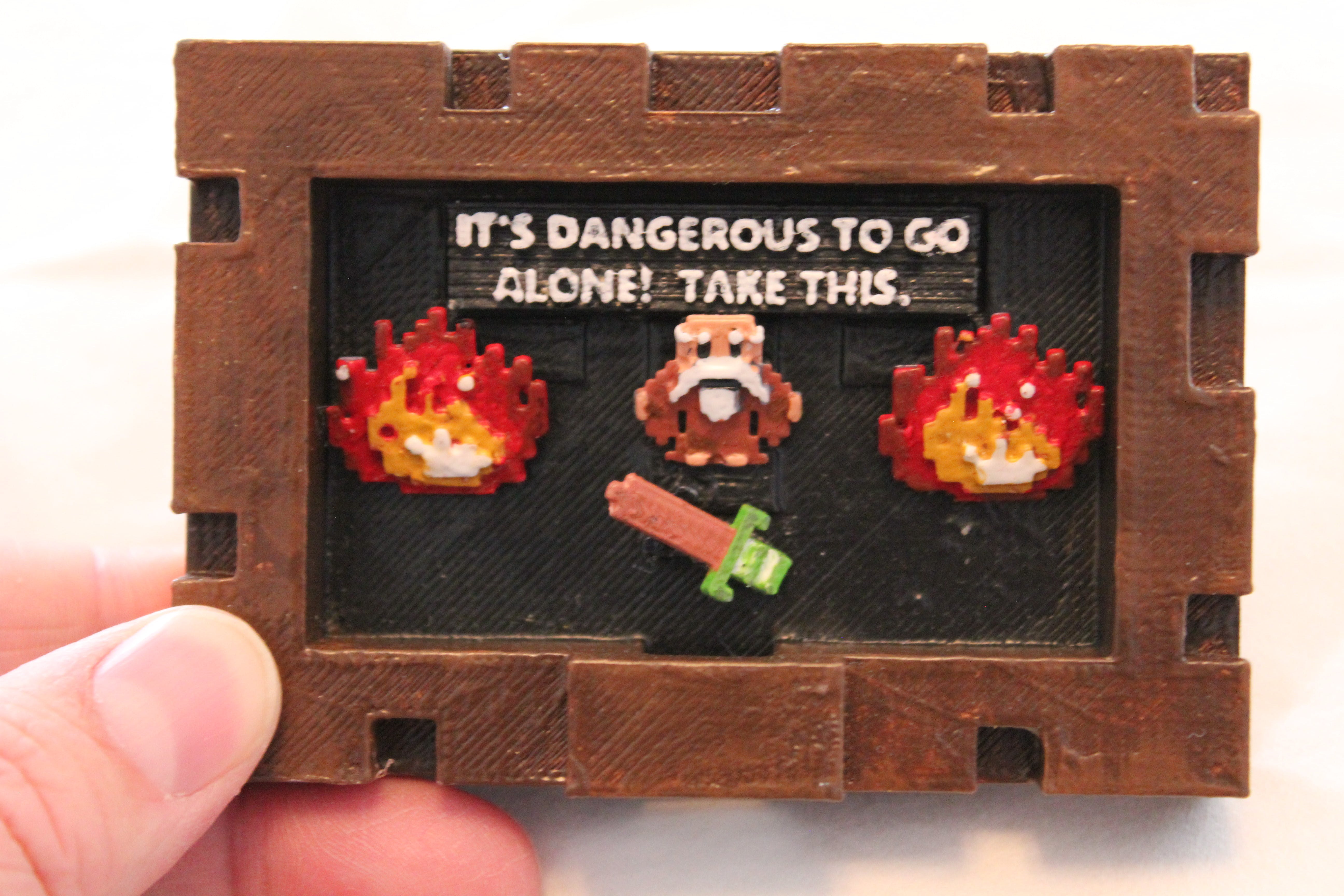 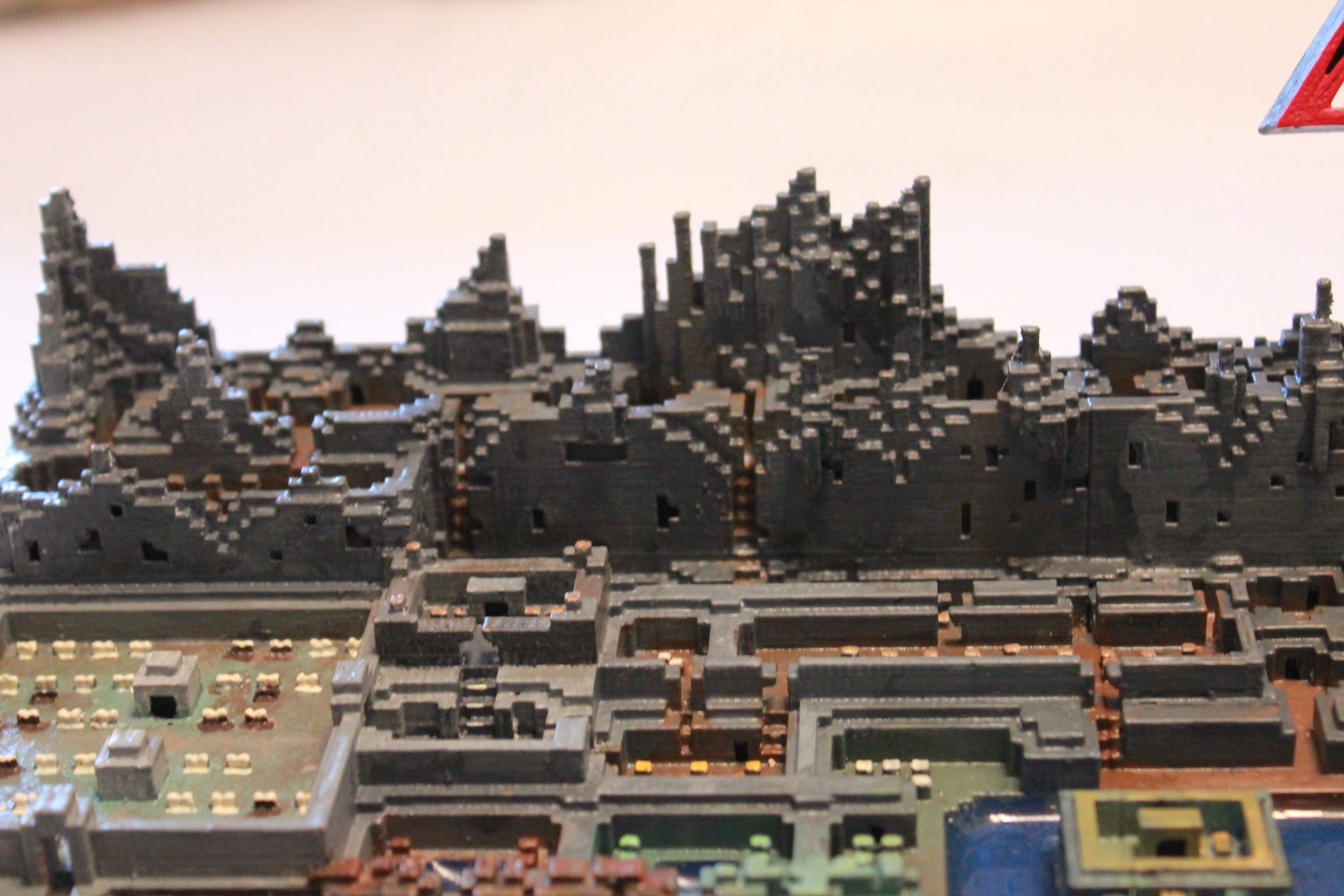 “I had people asking me to hold the map because they had to drive 4 hours to come and get it,” Frazier told the Daily Dot via email. Willard McFarland ended up beating out the competition as the lucky buyer of the original map. He shared pictures of his purchase online where it got noticed by gaming YouTuber Mike Matei of Cinemassacre fame.

The response was immediate. Legend of Zelda fans everywhere wanted a 3D map of their own, and Frazier suddenly had dozens of requests coming in. He quickly set up a shop on Facebook to take orders. Each map is still painstakingly hand-painted by Frazier, making the now $300 asking price more in line with the effort involved. The Daily Dot reached out to Frazer to shed a little light on his process.

Did it really take six months to build in Minecraft?

Yes, this is how long it took from inspiration to completion, and I had many iterations of the map, some were for actual gameplay, and finally the last one was for 3D printing. You must change many things for an optimal 3D print. But this is not to say I spent six months in Minecraft. Only that it was a six-month time from inspiration to completion. I would estimate I spent about 72 hours in total in Minecraft on the map. Just a guess though, I was never really paying attention to the minutes in there. Time sort of gets away from me when I “get in the zone.”

How is it put together? Is it printed in three sections?

Yes. My print bed is only 7.5 [inches] wide and the map is nearly 18 inches long. I do print in 3 pieces and then glue them all together.

How long to hand paint?

Each map I print takes different amount of time. I do my very best to make each paint job unique in some way. The painting takes me a very long time, but there’s much more I must do before that begins. Prep work includes snipping spider webs out of the map, and cleaning up and other anomalies. Spider webs are thin bits of plastic that stretch out and dry between structures and the print head retracts and moves to a new start location. With all of the small bushes, trees and other objects you do get a lot of webbing. 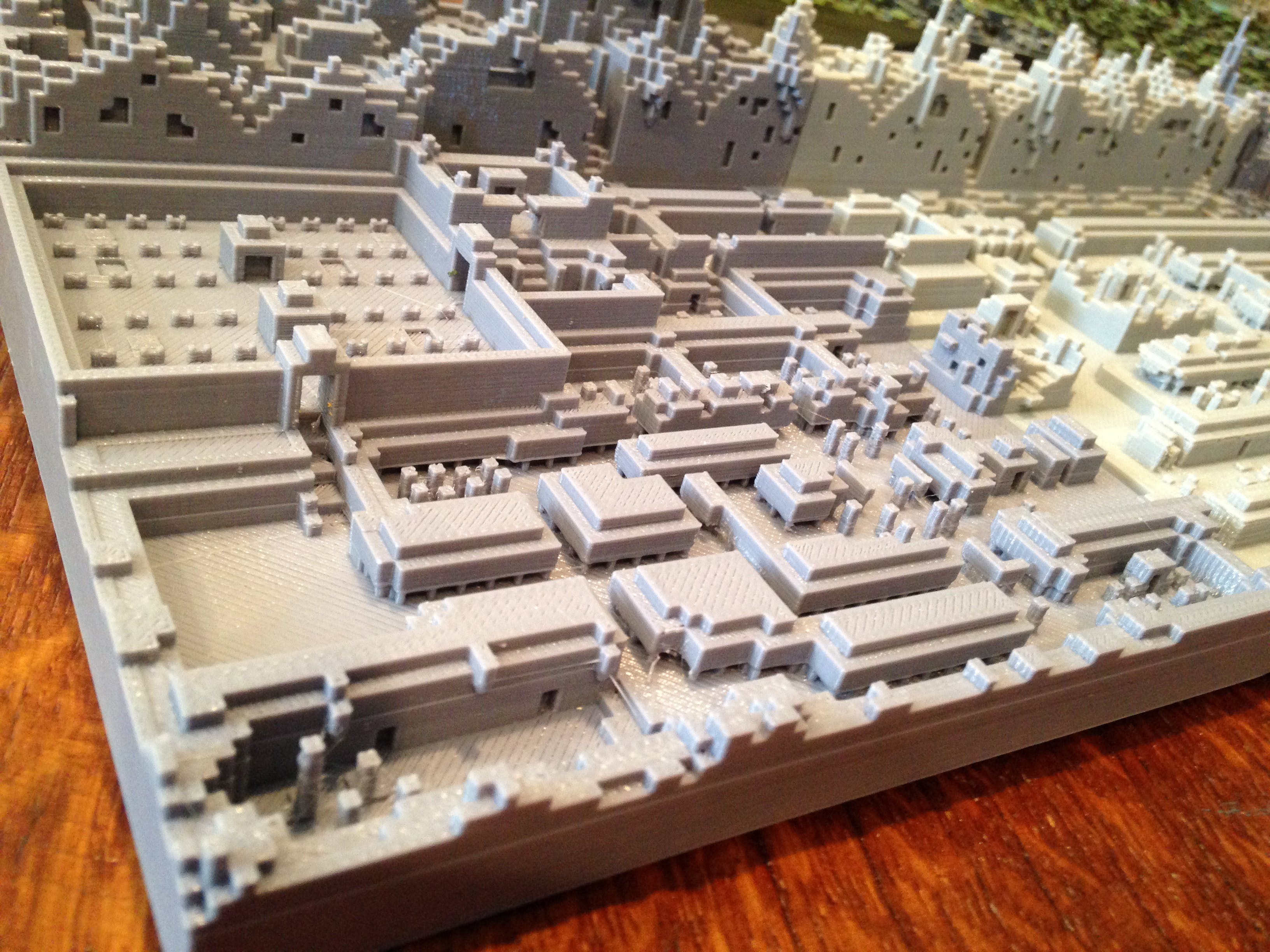 Then I have to primer twice before I can start using any brushes. The actual micro brush and toothpick painting then takes about 6 to 12 hours. Once that is complete I then give two coats of protective coating spray and finally fill the water features with resin water that takes 24 hours to cure. Sometimes water features need more than one application of the resin as well. 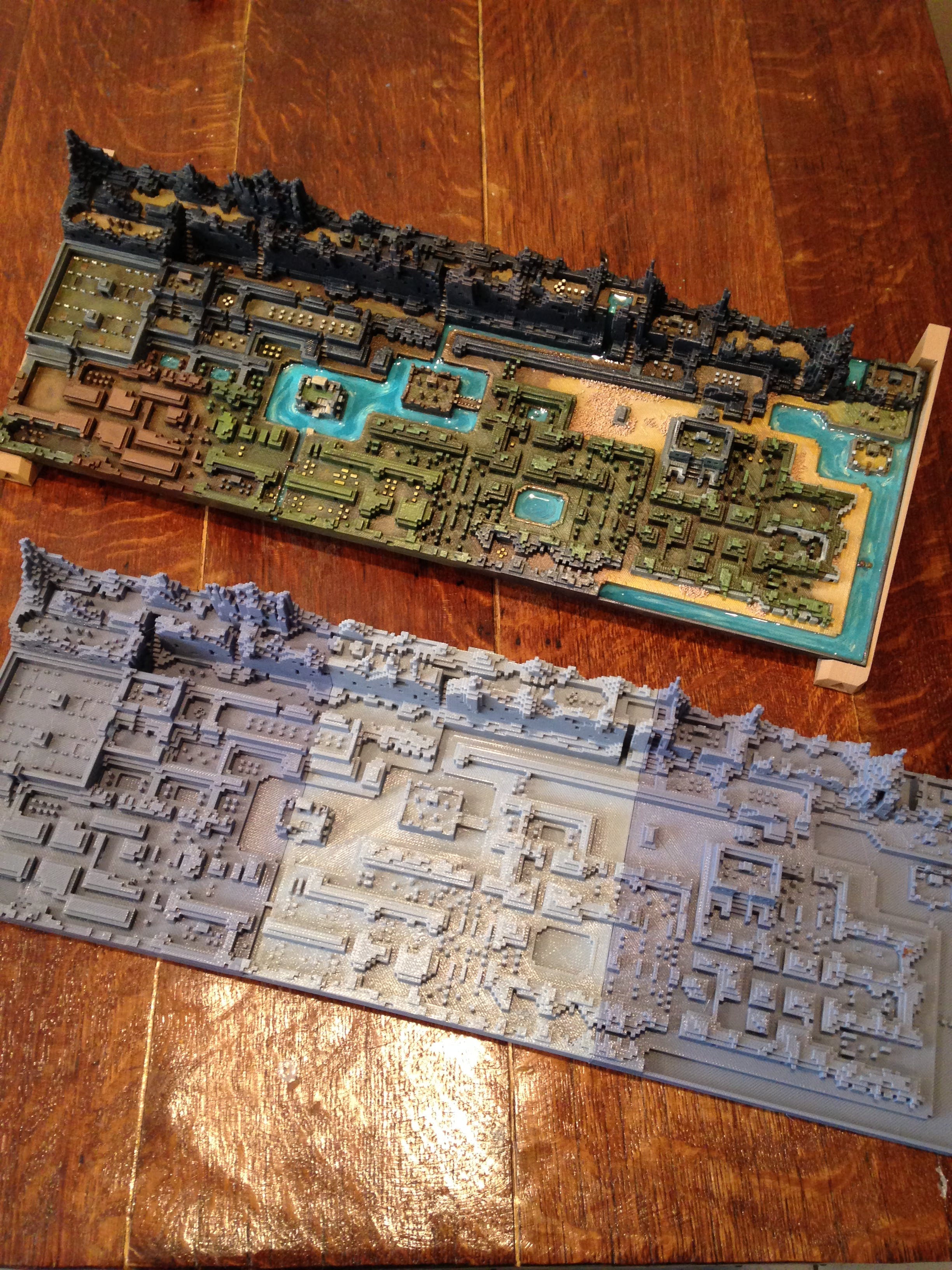 Are you taking new orders?

I am always excited to fill an order. At the moment I still use one printer and with painting it takes a week per order and I can get backed up quickly. My dream is to get a full color desktop 3d printer. They average about $6,000 so it will be some time before I can ever afford one. This would reduce the time to complete a map and reduce the costs to each order significantly. Hand painting will always be an option for anyone who wants it, even if I ever get a color printing option.

Anything else you want to add?

Only that everyone I have met during this have been so amazing. I thank everyone who inquires about the work, it truly does make a hobby into something more fulfilling when you know others share a similar passion and share that with you. 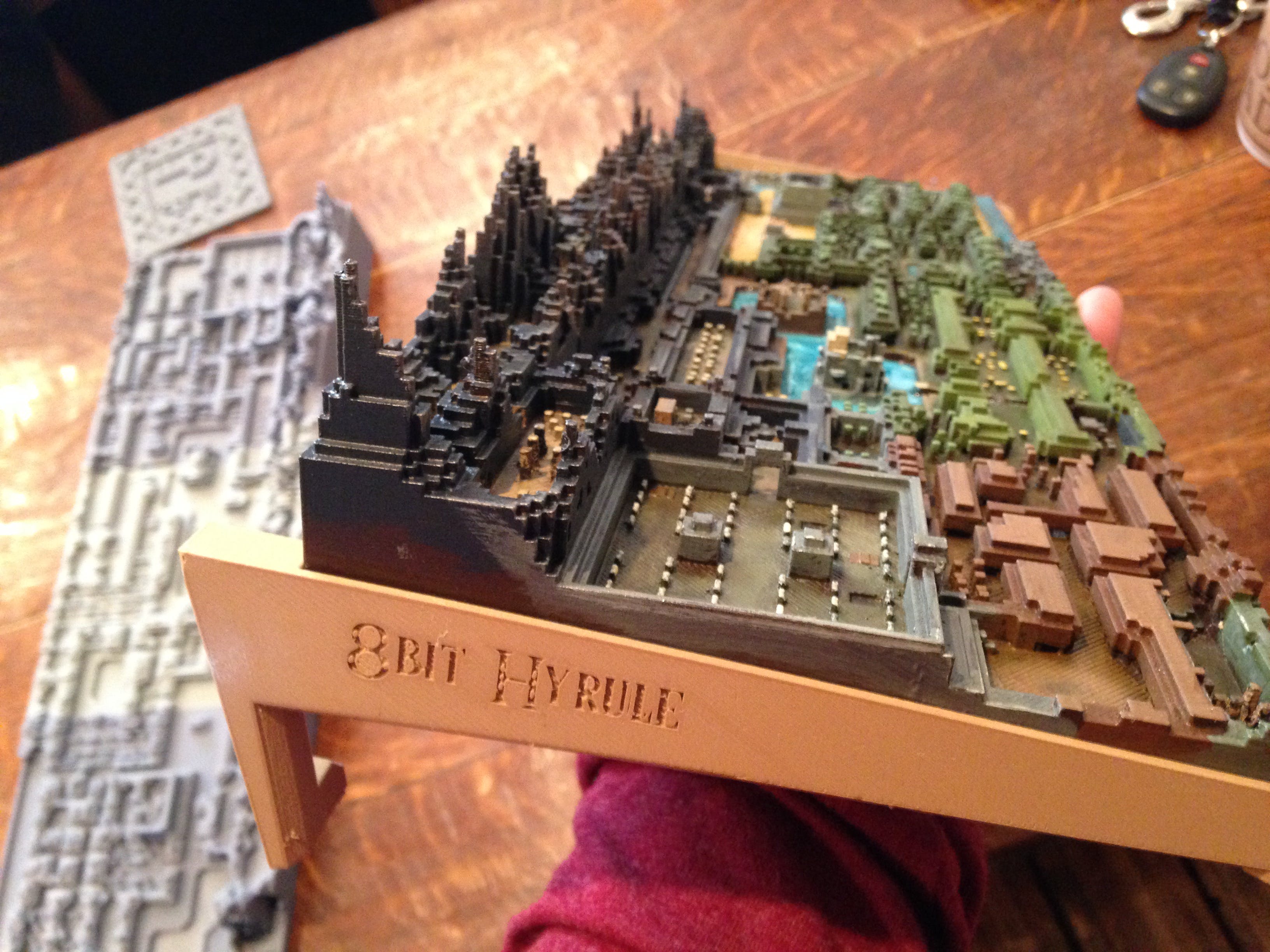 I also have many more worlds created and ready to share, but the current map has been popular enough to keep my printer buzzing nearly non-stop.  I haven’t had time to print any prototypes of these other worlds. I use Minecraft, Blender, Anim8or, Autodesk 123d, Simplify3D, Ultimate Unwrap3D, and more to create and design.