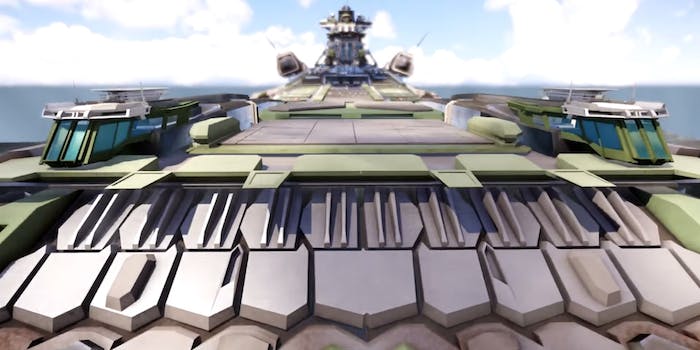 The next-best thing to the return of the TCS Tiger’s Claw.

Developer Chris Roberts, when first pitching his crowdfunded game Star Citizen back in October 2012, promised a simple and obvious evolution for the space combat sim genre: The ability to get out of the cockpit.

Now YouTuber Parlas Denton has published what he claims to be hand-assembled, leaked assets from Star Citizen. Denton refers to the work-in-progress model as “Bengal.” It is definitely the ship from the original Star Citizen trailer, which means it is either truly composed of leaked assets from the game, or someone had an awful lot of free time on their hands to build a detailed, accurate copy from scratch and pass it off as the genuine article.

Anyone who played Wing Commander spent countless hours inside the TCS Tiger’s Claw, a starfighter carrier from which players took off to fight the genocidal Kilrathi aliens. Exploring the Tiger’s Claw was limited to static camera shots of the lounge, crew quarters, and briefing room, with only a brief look at the flight deck before taking off.

The TCS Tiger’s Claw was a Bengal-class carrier. The first starfighter model revealed for Star Citizen is called a Hornet. One of the first ships you flew in Wing Commander was a Hornet-class light starfighter. Again, calling the WIP model “Bengal” would be an obvious play on nostalgia by way of lending authenticity, but we’re going to go with Occam’s Razor.

What we are probably looking at in the leaked footage is the starfighter carrier in which players will actually be based in Squadron 42, the single-player campaign in Star Citizen that Chris Roberts has described as the spiritual successor to Wing Commander. The footage may not be a walk through the Tiger’s Claw, but a tour of the Bengal-class carrier from Squadron 42 will be the closest thing anyone will ever get, and it’s 25 years in the making.

Considering the resources Roberts has pulled together, believing the leaked footage represents actual development assets from Star Citizen is no stretch of the imagination whatsoever. No release date has been announced yet for Star Citizen, and the project status page for the game shows that core elements like the persistent universe are still only in the design stage.