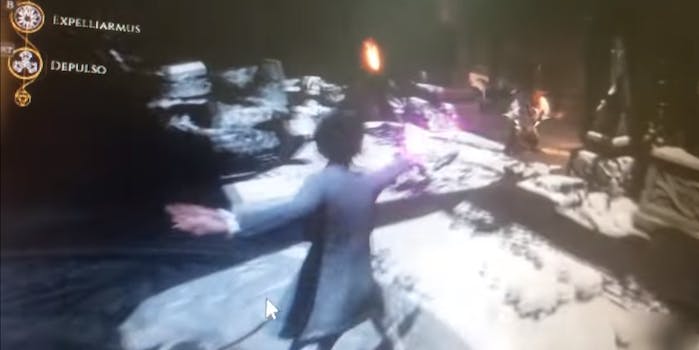 Get ready to spend all your money on this open-world style video game set in the wizarding world of Harry Potter.

Footage of an unannounced video game set in the Harry Potter universe in the 19th century has leaked online. According to VapeThisBro, who leaked the footage on Reddit, the somewhat fuzzy video was taken at a mall, where they were approached and asked to watch the trailer and take a survey. They were even nice enough to include the blurb about the game:

“Set in the 19th Century (1800’s) Wizarding World, this 3rd person open-world action RPG game centers around your character with unique abilities who has earned a late acceptance to Hogwarts School of Witchcraft and Wizardry. You are a newly arrived 5th year student to Hogwarts that demonstrates a latent gift for magic with a unique ability to track and identify remnants of a pottant ancient power.”

The video depicts a wizard mixing potions, gardening deadly plants, and hurling spells. The character depicted in the trailer isn’t someone you would recognize, as it appears the game has traditional RPG-style character creation, similar to that of games like Fallout 4 or Skyrim.

Under features, it lists an array of enchanting possibilities—exploring the wizarding school, making friends, uncovering secrets, choosing your wizarding house, choosing to become good or evil.

“From the questions it implied it was like Skyrim but in Harry Potter universe,” VapeThisBro wrote. Potion-making and Quidditch are both activities they confirmed would be parts of the game.

The previous Harry Potter games were released to mixed feedback, though a loyal few of us bought and beat them all. This game looks to be a far cry from the awkward mechanics and painful dialogue of those early 2000s games. It is rumored to be under development by Avalanche software, which last year asked for writers who had “a deep understanding of British culture”  to contribute to an RPG with “branching storytelling,” according to the Verge.

Of course, people immediately began to speculate that the footage was fake. VapeThisBro assured commenters that they did not have the talent or time necessary to create such a beautiful fake teaser, but there is always a chance that someone else did just that. A more legitimate fear, perhaps, is that this game will wallow in the never-released chasm in which B.C. and Star Wars 1313 languish.

The video looks too much like a real game teaser for those fears to feel very real, however. The pacing of the video, along with how much gameplay is included, makes it seem authentic.

We’ve reached out to Warner Bros., which oversees Avalanche.