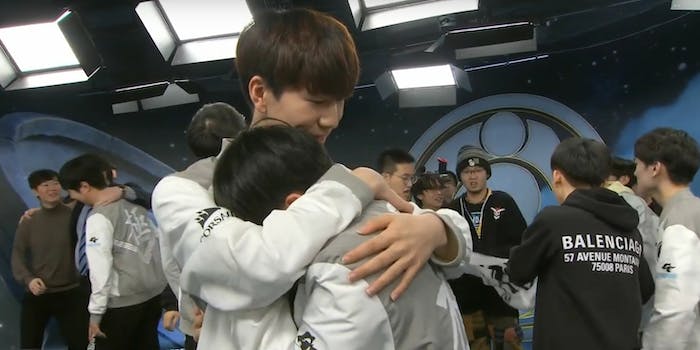 It's the first time a Chinese team has won the World Championships.

Even if you’re not a huge League of Legends fan, and even if you have no idea how to play the darn thing, the joy of a young team winning their first championship is universal.

That’s exactly what happened during the 2018 League of Legends World Championship, and it was quite heartwarming for anyone who appreciates a good bit of sports drama. Invictus Gaming took the crown this Saturday, going 3-0 against the all-European team “Fnatic.” Invictus became the first Chinese team to win the LoL World Championship, after two other years where Chinese teams managed to make it to the grand finals in the past.

Check out the moment where Invictus finally toppled Fnatic, sending the team into an uproar of celebration.

The most emotional member of Invictus was clearly Song-eui Jin, aka“Rookie,” who can be seen embracing other members of his team and crying into his teammate’s chest.

Rookie wasn’t just crying as he hugged his teammates, though. The young League of Legends star was chosen to give a speech during the awards ceremony that followed immediately after. Though it’s tough to make out his exact words thanks to the dual language barrier (Rookie, born in Korea and living in China, answered in both), the translator trying to keep up, and the roar of the crowd, he’s clearly still overcome with emotion in the moment.

“I’m just so thankful,” Rookie said, via the translator.

The teams at the League of Legends World Championship were competing for a prize pool of over $2 million. Invictus themselves won over $800,000 for their first-place finish.