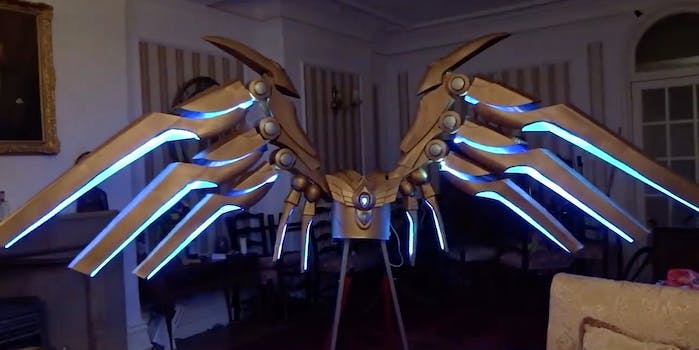 It's his first cosplay ever, so no sense going all out, right?

The League of Legends Worlds Championship series is about more than declaring the best gamers in the land. It’s also a chance to level up your cosplay game.

At this year’s quarterfinal competition in London, it was all about these robotic wings—a jawdropping feat for the guy who put thousands of hours into building them.

This fan made a Facebook account to show off his cosplay of Aether Wing Kayle from the League of Legends franchise. As he notes on his account, this is his first cosplay ever. Oh, and it’s a fully functional pair of enormous wings with robotic maneuvering capability and variant lighting sequences, all powered by a custom-built Android app.

No point getting too elaborate your first time out, right?

Elmin writes: “It’s motorized to raise feathers, rotate backwards behind me and more.” Then he modestly adds, “It’s a WIP.”

Sure, Elmin, but what else can they do? The wings have a “a sweet rave strobe mode?” They come with sequencing and “coordinated servo motor movement?” You spent hours heat molding each section of the wings by hand?

Elmin notes that his design is fairly “basic” and that it uses a host of unlikely parts. “Parts of a microwave, bed frame, shelving, PC power supply, and motherboard were used in it,” he writes. In case you’re wondering how someone goes from zero cosplay experience to totally winning at cosplay forever in a single costume, it helps to be a programmer. Elmin notes he has “a degree in computer science,” then adds that the costume’s “microcontroller has over 1,000 lines of code.” He also says he “previously had very little to no knowledge in every other related aspect. It was all self taught for the purpose of this costume or/and out of interest.” I guess there’s no accounting for sheer raw talent, dedication, and absurd levels of intelligence.

Since he made the Facebook page in October, it’s been found and followed by more than 30,000 fans, who are likely as astounded as we are by the amount of work and detail that went into assembling this costume. Though Elmin has been beset with requests to buy replicas of the set of wings, he’s more interested in perfecting his design before he starts making a profit. He says the costume only realized about 70 percent of the vision he had in mind.

To that we can only say: Sheesh, if that’s 70 percent, we can’t wait to see what 100 percent looks like.