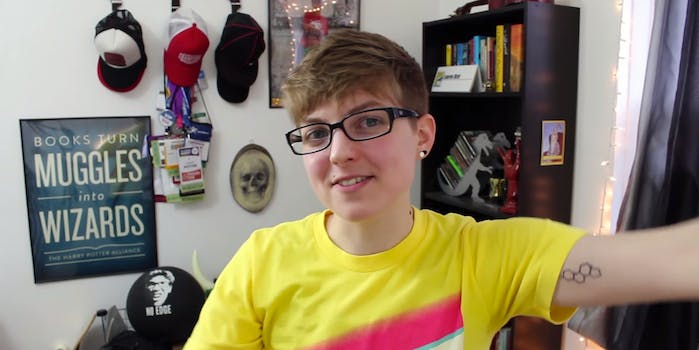 'It didn't feel like me—it felt like a game. A game I was winning... but I wasn't playing the game as me.'

The Harry Potter fandom community on YouTube is celebrating a difficult and heartwarming announcement by one of its own.

Jackson Bird, the spokesperson and communications director for the Harry Potter Alliance, has come out as trans in a moving post to his vlog in which he talks about the crucial importance of positive transgender representation in the media.

Speaking to the Daily Dot by email, Bird said he’d been “itching to come out” for years, but held back because “telling them necessitated telling the entire Internet:”

The entire internet includes not just trolls, bigots, and haters, but also my family, everyone I went to high school with, my kindergarten teacher, my church choir director, everyone. So I had to tackle coming out to a lot of people in my personal life and build up a resilient shield of self-acceptance before I could post this video and tell some of the people who I’ve wanted to share this with the most.

Bird, formerly known as Lauren, is known for making educational videos and resources on GLBTQ-related issues, as well as for his work for the HPA and light-hearted videos like the popular “Will it Waffle?” series. On Wednesday, however, he took time out for a much more serious conversation.

Bird states he wanted to make the vlog post as a way of cutting down on the number of times he had to come out to people on an individual level. But he also stresses that “lack of information and poor media representation had a horrific and long-lasting effect on me,” and he hopes his coming out will help other trans viewers see positive representations of themselves and know they aren’t alone. He also created a list of resources and information on basic concepts surrounding transgender identity, which he shared via Dropbox.

Though the tone is lighthearted, Bird addresses a number of issues that should be extremely familiar to most trans teens and young adults, from feelings of dysphoria and duplicitousness over his former self-presentation, to parental embarrassment and confusion, to the eventual realization that not addressing the issue was only derailing his life.

In Bird’s case, being a well-known vlogger and representative of an even more well-known non-profit made it harder:

I’m being gendered in so many new ways, and I’m meeting so many new people who are putting all these gendered assumptions on me… when you’re a spokesperson and a video creator, you are confronted with how you look and how people perceive you on a daily basis.

The Harry Potter and YouTube communities seem to have responded with universal support.

We’re so proud of our Spokesperson and Communications Director Jackson Bird. Check out this brave & important video: https://t.co/MrddBhG2HV

GeekyCon (formerly LeakyCon) director Melissa Anelli chimed in with congratulations, as did Buzzfeed’s Alanna Bennett and Wizard Rock legends Harry and the Potters:

I'm so proud of my brave friend Jack. (@laurenthebird, but tonight will be @jackisnotabird). He's kind of awesome. https://t.co/xMYWB4YMPt

Our friend Jackson (@laurenthebird) is a great person and made a really important video coming out as transgender. https://t.co/SxWYoai3EW

Speaking to the Daily Dot by email, Bird said that he “never had a doubt in my mind that Harry Potter community would accept me with open arms”:

They are a warm, loving, inclusive community and many of them are queer or trans themselves. Something about Harry Potter’s insistence on befriending people (or magical creatures) who are different from himself and systemically discriminated against I think resonates with a lot of people who experience that in our own world.

“It’s like being open with yourself is some sort of miracle drug,” Bird laughed when discussing the relief he felt at finally getting to be himself.

And now that this issue is no longer standing in the way of his future? Bird tells the Dot that he “hopes to lead the front on re-energizing the Harry Potter Alliance’s LGBTAQ efforts as well as continuing my Will It Waffle series on YouTube and hopefully beginning to post a lot more videos about my trans experience.”

“I’m also working on several projects documenting my transition in creative ways, including working with some friends on a documentary that will explore identity formation and belonging both for transgender people as well as in online fan communities.”