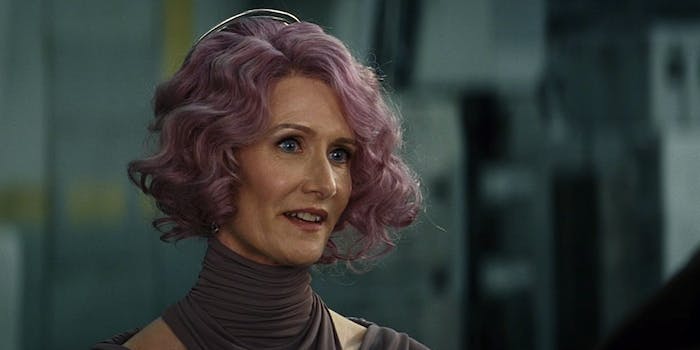 Star Wars: The Last Jedi might have opened a dramatic new chapter for the galaxy, but it was still a playground ripe for its actors to embrace their inner kid, pews and all.

Take Laura Dern, who plays Vice Admiral Amilyn Holdo in The Last Jedi. She takes over as the leader of the Resistance while Leia is unconscious for a good part of the movie and quietly siphons fuel from the Raddus into transports so the Resistance can escape to Crait. But as the Resistance heads into disarray amid Poe Dameron’s impatience, she’s thrust into a fight for control of the ship. Even with her blaster set to stun, Holdo knows how to wield it. But according to director Rian Johnson, Dern would apparently say “pew” to mimic the sound effect of firing a blaster as she filmed a scene of her character firing a blaster.

"You can see Laura Dern say 'pew' when she fires the gun, which she could never not do every time she shot it." — Rian Johnson, Star Wars: The Last Jedi Commentary pic.twitter.com/Wkr803BQte

The revelation isn’t exactly a surprise. Dern admitted as much herself in an August 2017 interview with Stephen Colbert after noting that Johnson had already told the story. As a lifelong movie fan, walking onto the set of Star Wars transported Dern back to the childlike wonder of being a fan at age 8.

“I didn’t know I did it, and I guess they were watching dailies and recognized it deeply,” she explained. “There is a moment where I get to have a space weapon in my hand and—I guess didn’t realize I was back in my bedroom at 8 years old—doing the scene I went, ‘pew, pew!’ as I was in the middle. They’ve taken the sound out, I don’t think you’ll hear that in the movie, hopefully. I was so excited. I mean, it’s Star Wars!”

Dern finds herself in good Star Wars company. Hayden Christensen revealed at Star Wars Celebration last year that he mouthed lightsaber sounds while filming fight scenes and didn’t realize that he was doing it until George Lucas told him.

And Ewan McGregor even admitted that he had some trouble kicking the habit of mimicking lightsaber sounds as he portrayed a young Obi-Wan Kenobi.

“To begin with, it was quite difficult not to make the sound,” he said in a 2011 Graham Norton Show appearance.

It really is, though.