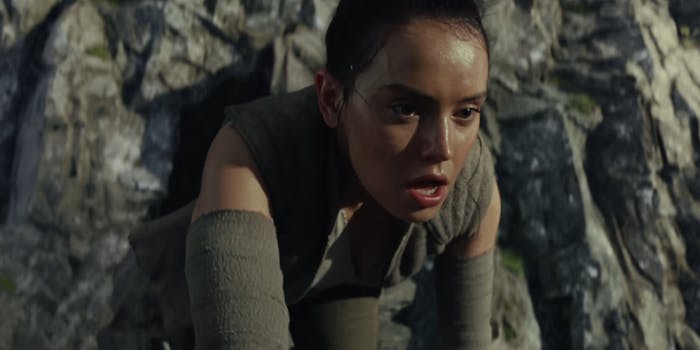 Star Wars Celebration is now in full swing, and The Last Jedi panel was surely the biggest moment of the weekend. Director Rian Johnson joined castmembers including Mark Hamill, Daisy Ridley, and John Boyega for an eye-opening look at the upcoming movie.

The Last Jedi teaser continues directly from The Force Awakens, with Rey using the Force and (seemingly) beginning her Jedi studies with Luke Skywalker. It avoids giving away any plot details, focusing a lot on Rey and Luke, with brief glimpses of Leia, Poe and BB-8, Kylo Ren, and Finn, who looks like he’s in a coma. None of the new characters appear.

Little-known actress Kelly Marie Tran has the biggest new role in The Last Jedi. Her character is named Rose, a maintenance worker for the Resistance. Filming was so secretive that she spent four months telling her parents she was working on “a Canadian indie movie,” going as far as mailing them some maple syrup as proof.

Rey and Finn in The Last Jedi

Actor Josh Gad hosted the panel, following up on a series of viral videos where he interrogated his Murder on the Orient Express co-star Daisy Ridley for Star Wars spoilers. She dodged his questions about Rey’s parentage, sharing some more general comments about her role. Apparently Rey “has certain expectations about what she might get from Luke,” potentially creating some friction between the two Force-sensitive heroes.

Mark Hamill, Rian Johnson, and Star Wars boss Kathleen Kennedy all seemed very excited about Luke’s role, saying that Hamill had creative input due to his long relationship with the character.

John Boyega was the most spoiler-free person onstage, chatting about his friendship with Daisy Ridley, but otherwise staying quiet about Finn’s role. Finn needs to recover from his injuries after The Force Awakens, and we still don’t know what that means. Boyega’s only hint was that Finn must choose between fleeing the First Order and joining the Resistance.

Rian Johnson says the film is “very far along” in the editing process, with Kathleen Kennedy praising his skill for writing “amazingly fierce and independent women.” Johnson also shared some unseen photos from the set, including several of Carrie Fisher in costume as Leia.

Carrie Fisher had a long career as an author, screenwriter, and script doctor, so J.J. Abrams and Rian Johnson both asked her for input on their Star Wars scripts. Johnson said he “connected to her first and foremost as a writer,” and spoke about sitting on her bed for hours, having “stream of consciousness” conversations about the movie.

Finally the panel wouldn’t be complete with BB-8. The little droid was a breakout star from The Force Awakens, and appeared onstage for a droid-speak interview with Josh Gad. Rian Johnson described him as “the Buster Keaton of this movie,” saying that for The Last Jedi, he followed some very important advice from J.J. Abrams’ editors: “You can’t have enough BB-8.”

Click here for everything else we know about The Last Jedi, including casting news and behind-the-scenes updates.