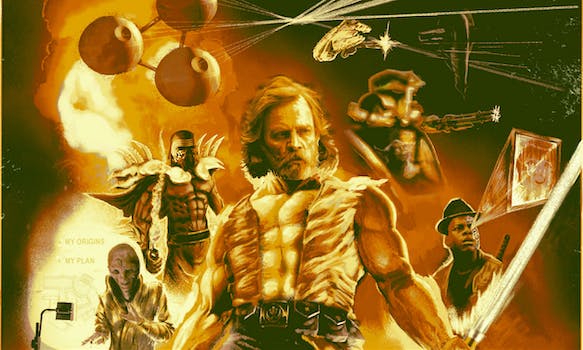 Someone made an incredible poster for that ‘Last Jedi’ remake

The haters will love this.

Remember that definitely not real campaign to raise funds and remake The Last Jedi? It received plenty of ridicule and mockery from fans and creatives alike, and although its chances of going forward are nearly nonexistent, it already has a fitting poster.

The poster, which was created by graphic artist Fernando Reza and is available to purchase, has a little bit of everything. Although it keeps the reddish tones that The Last Jedi invoked through Snoke’s throne room and Crait, the rest of the poster is a loud takedown of the fanboy culture that suggested a remake in the first place.

Both Luke Skywalker and Kylo Ren are ripped, with the latter showing off the eight-pack abs we know he really has. Snoke has a new method of projection, BB-8 is carrying a baseball bat, there are guns and lightsabers. Rey, on the other hand, is serving up a porg right out of the oven while Leia was put back into the bikini she hated so much.

And did you like the Death Star homage in The Force Awakens? The Last Jedi has even more Death Stars—three of them!

“Poster done, now all we need is a script, a cast, the rights, a director, money, and talent,” Reza wrote.

My teaser poster for the Last Jedi Remake is now up in the shop. Poster done, now all we need is a script, a cast, the rights, a director, money, and talent. https://t.co/PhEdA1CHYY #RemakeTheLastJedi #JulyTheSecondBeWithYou pic.twitter.com/j8VczWNHX4

According to the poster, The Last Jedi remake is “a film by a bunch of dudes from the internet.”

It already got the seal of approval from Rian Johnson himself, who has taken to trolling the attempt to remake his film.

And if you think it’s missing something (whether it’s “shoulder pads or lightning,” chances are someone will have you covered.