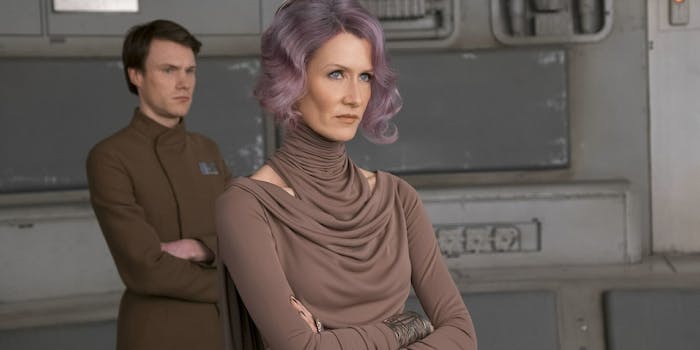 Star Wars gets wrongly snubbed for a costume design Oscar—again

Forget 'Beauty and the Beast.' 'The Last Jedi' is a masterpiece of detailed, thoughtful costuming.

The Oscars’ costume design category is almost always a disappointment, nominating a deluge of historical ballgown movies with a smattering of fantasy to mix things up. Contemporary films rarely get nominated at all.

Beauty and the Beast is the most embarrassing choice because, while Jacqueline Durran is one of the best costume designers around, this movie was… very basic. I suspect it was nominated because voters remembered the princess dress, but to be brutally honest, that dress wasn’t very good. Otherwise, it was a thoroughly unremarkable example of the fairytale fantasy genre. That slot should’ve gone to The Last Jedi, an insulting snub after the Oscars ignored The Force Awakens and Rogue One as well.

There are plenty of other films I’d love to see on that shortlist (The Florida Project, John Wick 2), but The Last Jedi feels like the worst snub because it was such an obvious choice. It combined artistic flair with technical accomplishment and—crucially for an Oscar nomination—everyone saw it. There’s really no good explanation for its absence. Star Wars movies rely heavily on visual worldbuilding and symbolism, and The Last Jedi even included an ostentatious party scene—exactly the kind of thing that usually appeals to Oscar voters.

In terms of costume design, The Last Jedi has everything. Leia and Holdo’s gowns provide stiff competition for any opulent historical drama you care to name. Its alien cultures have different styles of clothing based on their values and climate, from Canto Bight’s wealthy casino patrons to the alien nuns on Ahch-To. The film’s political themes are woven into the Resistance’s rough-and-ready uniforms and the First Order’s fascist aesthetic. And as a feat of organization, its massive cast represents an epic workload for the costuming team.

There are points in The Last Jedi where costumes play directly into the plot, like Rose Tico’s Casablanca-inspired ring (one of several pieces of meaningful “space jewelry“), and Luke Skywalker altering his appearance to psych out Kylo Ren. The Star Wars movies were always very costume-focused (who is Darth Vader without his armor?), but designer Michael Kaplan added another layer of character-based storytelling in the new movies. We see more emotional details like Poe and Finn’s shared jacket in The Force Awakens, or Rose and Paige Tico’s matching necklaces. That’s before we even get into visual symbolism, an integral aspect of the film. To take just one example, look at Rey.

In both movies, Rey wears a beige color palette, short leggings, and bandage-like wrappings on her arms. It’s both a uniquely recognizable look and an obvious callback to earlier characters. The sandy colors and belted silhouette are a direct reference to Jedi robes and to Luke and Anakin Skywalker’s original costumes, yet the whole outfit is something a teenage girl could make from hand-me-downs on Jakku. (The long scarves are adjustable and versatile during sandstorms, and in The Force Awakens we see Rey wearing a repurposed pair of Stormtrooper eyepieces as goggles. Practical!)

In the photo on the right, Rey wears a poncho cape—an ongoing motif among Star Wars protagonists. On the left she looks more like a traditional Jedi—particularly Anakin Skywalker in Revenge of the Sith, wearing a wide belt over a front-paneled tunic. In turn, that ties into the possibility of her turning to the Dark Side. She’s transitioned from her Jakku costume to a Jedi look, but she isn’t wearing a master’s robes like Luke or Obi-Wan.

Finally, there’s an ongoing visual link between Rey and Kylo Ren. In The Force Awakens, their costumes follow a similar pattern: trousers with long panels over each leg, and a belt at the waist. They unconsciously mirror each other before they even meet, highlighting their connection to each other and to their precursors in the Star Wars mythos. In Ren’s case the references are even more direct, because he’s basically a Darth Vader cosplayer.

Many of the other costumes in The Last Jedi are similarly complex, drawing from historical inspiration and tying into each character’s individual role. You can appreciate them on multiple levels, from simple aesthetic appeal to characterization to geeky worldbuilding attention to detail. At this point, it’s ridiculous that Michael Kaplan hasn’t received the Oscar nod he deserves.