Screengrab via Ladykiller in a Bind

After four years of work on this project, Christine Love is ready for a change.

Any gamer with a taste for visual novels knows Christine Love‘s name. Thanks to her work, we’ve have had the pleasure of mucking about in vivid worlds built of bits of social media in its earliest forms: old operating systems, message boards, and dial-up connections.

Love’s newest game, Ladykiller in a Bind, strays from the trademarks she’s known for. Instead, you’re trapped on a cruise ship with a ton of people you don’t know. The problem is that they know you, because you’re crossdressing as your spoiled, affluent brother during your stay. And you’re going to need a way to convince them that you’re actually him—including his past flings and worst enemies.

Love tells The Daily Dot in a Skype interview that after making several games about “lonely girls on computers,” she was ready to do something sexy and fun.

“I’ve done a lot of depressing games in the past,” Love said. “I needed something that wasn’t a bummer.”

Love is referring to the games that cemented her name in the industry: Digital: A Love Story, Don’t take it personally, babe, it just ain’t your story, and Analogue: A Hate Story. The first two were released for free in 2010 and 2011 respectively. Focusing on themes of privacy, artificial intelligence, LGBT issues, and interpersonal relationships, her work takes an unflinching look at how dark humans can be. 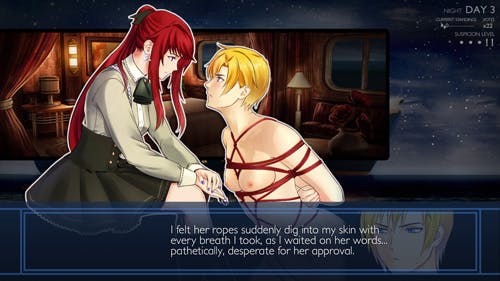 Ladykiller in a Bind is all about choices. Unlike many other games that assume you know how each choice will move the story forward, Ladykiller in a Bind has labels on each, such as Rebel, Noble, and Ruthless, giving players a quickly identifiable route to take.

“Tone indicators are always good,” Love said. “I don’t want players to be surprised by the results of their choices.”

The game’s characters forgo traditional names, instead going for roles such as The Nerd, The President, The Boy, The Maid, and The Swimmer. None of the male characters are pursuable (you do play as a lesbian, after all), but any woman on the ship is fair game for your wanton desires. 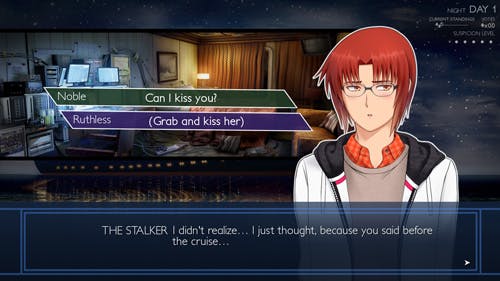 There are dozens of ways for gamers to play out the interactions between the members of the cast. Love says that the task of developing each potential branch of the story was so challenging that she had to create her own editor to clearly see the paths of the story, making sure that no one went on for too long.

“Every character has five potential scenes, and a story arc appears in each,” she said. “From there, I break it down. What info is conveyed? How does each choice push (the story) forward? And so I improvise a lot, as I go.” 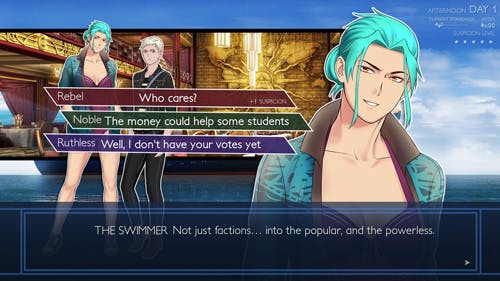 By far her most complex offering, Love constructed Ladykiller in a Bind with care and time, which shows in the polish of her final product. During the four years she worked on it, she also came to the weighty decision that this would be her last visual novel.

“I’ve been doing this for a long time,” she said of her past work. “When this is done, I’d like to take a year off and teach myself new programming and other mechanics.”

Love says that her core interests are still characters and relationships, but that she’s been drawn to the idea of making a game that gives a powerful sense of movement and place.

“I’d love to make a game like Majora’s Mask, with that sort of atmosphere,” Love said. “What can you learn about people that live in a place (such as that)?”

Ladykiller in a Bind will be available in July. You can sign up to be notified when it comes out right here.