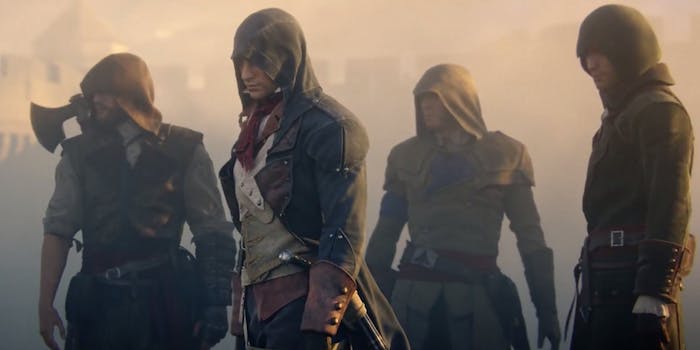 Ubisoft claim that including women in the game would have "doubled the work."

Assassin’s Creed: Unity took three years to make, and its new trailer and gameplay demos have been met with rapturous excitement from gamers across the world. There’s one problem, though: There aren’t any playable female characters.

According to Ubisoft’s technical director James Therien, this is because it would have “doubled the work.”

“It was on our feature list until not too long ago, but it’s a question of focus and production. A female character means that you have to redo a lot of animation… It would have doubled the work on those things. And I mean it’s something the team really wanted, but we had to make a decision… It’s unfortunate, but it’s a reality of game development.”

To put things into perspective, the previous Assassin’s Creed game cost an estimated $100 million to make, and had about 900 people working on it. Ubisoft may claim that the decision to exclude women from Assassin’s Creed: Unity is “a question of focus and production,” but that just means they made a conscious choice to focus on male characters and audiences.

As Tech Digest points out, Ubisoft don’t even have the old excuse of “historical accuracy” to fall back on. Unity is set during the French Revolution, a time when plenty of women were fighting alongside men, including actual assassins.

To be fair, France did not invent women until 1938. To include them in Assassin’s Creed Unity would be wildly anachronistic.

The Assassin’s Creed franchise prides itself on its high level of detail during gameplay, so the “female characters are too expensive” argument falls a little flat. Particularly when you consider the fact that previous installments have included female characters, and that Assassin’s Creed: Unity allows players to customize the male protagonist’s appearance. The game’s co-op mode allows for four players, all of whom will appear as male.

It’s naive to think that you can just flip a magic switch and get both playable genders for nothing. It takes work & things are sacrificed.

What really happens is that someone has decided it’s more important to have, say, 50 dude costumes than 25 apiece for men and women.

This is shaping up to be yet another installment in the ongoing controversy about how women are treated in the gaming community. Ubisoft’s comments essentially treat female characters like an optional extra that can be cut for budgetary reasons, even when that budget is potentially hundreds of millions of dollars.

Plenty of women play the Assassin’s Creed games, and many of them are happy to play using male avatars. However, that’s not really a sign that they’d always volunteer to play under male avatars given the choice, it’s just that all too often in mainstream video games, “unshaven white man” is the only protagonist available.

Games like Mass Effect have proven that giving a more diverse range of character options leads to more positive reactions from gamers and critics, but it looks like Ubisoft is continuing to go the more conservative route. Instead, the colossal budget for Assassin’s Creed: Unity prioritized things like releasing six separate editions of the game, while female characters are seen as not being worth the effort