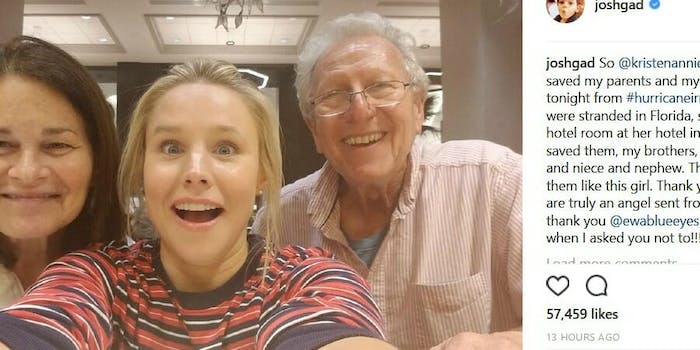 Josh Gad needed a hero, somebody who could help rescue his parents from their residence before Hurricane Irma hits Florida.

Luckily, Kristen Bell—his Frozen co-star who voiced Princess Anna in the iconic Disney movie—was there to make the save. Here’s how Gad publicly thanked her on Instagram.

So @kristenanniebell literally saved my parents and my entire family tonight from #hurricaneirma . When they were stranded in Florida, she got them a hotel room at her hotel in Orlando and saved them, my brothers, my sister-in-law and niece and nephew. They don't make them like this girl. Thank you Kristin. You are truly an angel sent from above. And thank you @ewablueeyes for bother her when I asked you not to!!!!

Bell is currently in Orlando, filming a new movie. But she—along with the 80-plus person film crew—couldn’t leave central Florida because of a high evacuation demand.

Last run to the store for #irma hurricane holdover prep while bracing down in orlando- we didn't have the option to leave so here we are. Just doing our best and trying to stay positive but cautious, and trying to help those who need help prepping. Every person i passed today was assisting someone else- #neighborshelpingneighbors – it was beautiful to see. Sad that a hurricane has to bring out the best in everyone- but happy that the community will be holding hands through this. Im grateful to Gary and the team at @swandolphin in epcot for helping us feel safe while we get through this together.

Still, she did a good deed for the Gad family, because as we all should know by now, Princess Anna is a bonafide hero.