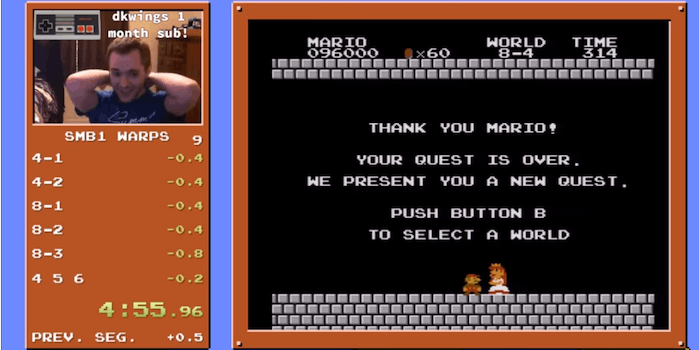 Kosmic did it in a nail-biter finish.

How long do you have to spend playing a game to get your money’s worth? Most players would say any game that takes you less than five hours is hardly worth the money spent, but those gamers are not speedrunners. Niche players who compete for the fastest time, speedrunners use their thorough knowledge of a game to race through levels, sometimes using minor glitches and insider tricks to “break the game” and subsequently break a record.

He did it in less time than it takes to listen to “Bohemian Rhapsody,” and it’s an astonishing feat:

The brief livestream uploaded to YouTube by Kosmicd12, who goes by Kosmic on Steam, shows the gamer darting through all the hidden routes and skipping full levels as he races to the finish. His real name is David Livingston, a 23-year-old from Utah. Livingston started speedrunning in 2011 after watching some videos about the glitches in The Legend of Zelda: Ocarina of Time.

“Someone named Brianmp16 posted a video that linked to a website called Speedrunslive, where I started doing races of Zelda and Mario games,” he told the Daily Dot.

Livingston still can’t believe he broke the record, more because of how quickly he managed it than because of the difficulty of the task. He said he spent an entire year trying to shave time off his run, and then managed to improve his time twice in the same night, with the 4:55 time coming less than an hour after his first improvement.

He already has his sights on the future. He says he hopes to shave more time off his run, as he was slightly disappointed in his performance on the last level.

“My next goal is to beat this run by about 1/5th of a second. The very last level of this run was a little sloppy so there’s some time to save there,” he said.

According to r/speedrun, the record he broke was in the “Any%” category, meaning that he did not beat all the levels but did complete the game. Speedrun.com shows that Super Mario Bros. is his game, however, as he holds the record not just in the Any% category, but also in Minus World Ending, Warpless All-Stars, Any% All-Stars, and Warpless categories.

Somehow I beat the Super Mario Bros. world record TWICE in one night, one of which was the very first 4:55 run ever. Here it is, 4:55.913! It's still improvable, but wow I cant believe I pulled this off. This also completes my 1st place leaderboard sweep!https://t.co/G4lGFzaWJA pic.twitter.com/HvmhYAjJ01

Toward the middle of the video, Kosmic started to realize how well he was doing. “Am I about to go down as the most clutch gamer alive?” he asked viewers as he completed level eight of the popular 1985 Nintendo game. As he neared the previous record, his nail-biting playthrough became more frantic. Through his obvious delight, viewers could watch as he came heart-stoppingly close to every piranha plant and bullet he passed, before barely zipping across the line at the 4:55 mark.

The playthrough was completed on a “real NES with an original NES controller,” according to the video description, where Kosmic also answered some questions viewers might have about how he played the level.

“I can’t believe this happened, but I’m very proud of this accomplishment,” he said.