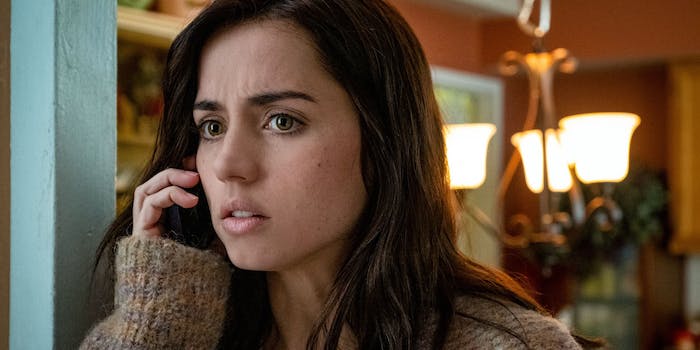 More than 200 people emailed the fake email in ‘Knives Out’

A 'Knives Out' producer recently discovered the months-old emails.

If an email address or phone number pops up in a show or film, chances are, people have tried to contact it. And while that info is often purposefully fake (see: a lot of 555 numbers) or can lead to an Easter egg planted by the production itself, in other cases, it’s a mix of both that can lead to some pretty interesting results.

About 90 minutes into Knives Out, Rian Johnson’s whodunit, Marta Cabrera (Ana de Armas) and Ransom Drysdale (Chris Evans) watch police investigate the local crime lab that had been burnt to the ground from the car. Marta, who inherited the entire fortune of the mystery writer (Christopher Plummer) she had been taking care of (and whose manner of death is called into question) is being blackmailed because of what she knows. Prompted by Ransom, she checks her email to learn the time and location of the blackmailer’s proposed meeting.

The email address itself is irrelevant; it only really shows us that it’s Marta’s email address because it has her full name in it.

But as it turns out, Marta’s email is a real email. And since Knives Out’s release in theaters, people have taken to emailing Marta. Recently, Knives Out producer Nikos Karamigios logged into Marta’s inbox to find that more than 200 people emailed Marta after seeing Knives Out or at least after discovering her email address somewhere; the emails are from late November to early December, shortly after Knives Out’s theatrical release.

We only see a snapshot of her inbox, courtesy of the screenshot Johnson shared on Twitter, so if someone sent something terrible to Marta, we don’t see it here. But what we do see is a great encapsulation of the internet itself. You have people questioning if the email works, someone requesting a vibe check, those who congratulated Marta on her role in the case and Knives Out itself, and naturally, someone asking if Marta could give them a loan.

All in all, for someone who just inherited a mystery writer’s entire fortune and publishing empire, it could’ve been much worse.