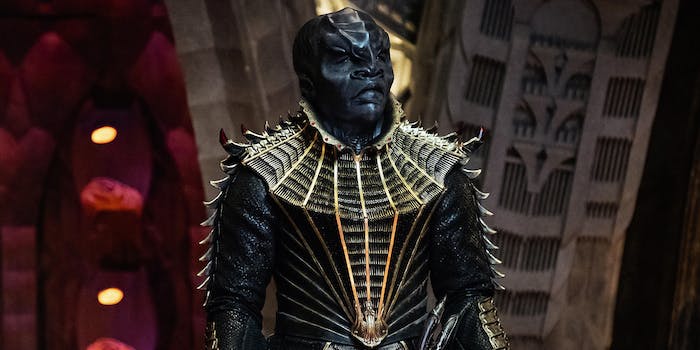 9 Klingon episodes to watch on Netflix before ‘Star Trek: Discovery’

These episodes will teach you about Klingon culture, spanning the best moments of the 'Star Trek' franchise.

Even if you’ve never watched Star Trek, you’ve probably heard of Klingons. These warlike aliens began as the mortal enemies of Captain Kirk and his crew, later forming an alliance with the Federation in .

The Klingons have a patchy history, ranging from epic Shakespearean drama to some rather clumsy writing, and occasional racist undertones. Star Trek: Discovery will be the first show to include a whole crew of Klingons in the main cast, exploring the political backstory of their war with the Federation.

So, now is the perfect time to check out some of Star Trek’s best Klingon episodes. They’re all on Netflix!

The Klingons make their first onscreen appearance in this season 1 episode, where Kirk and Spock beam down to the suspiciously peaceful planet Organia. Kirk wants to protect Organia from Klingon attack, but the locals refuse any outside help. Kirk and Spock end up stranded on the planet while Klingon forces invade, led by the cunning officer Kor.

“Errand of Mercy” is a formative and forward-thinking war story, depicting Kirk and his enemy as likeminded military leaders. Tying in with the Cold War themes of 1960s Trek, it foreshadows a future alliance between the Klingons and Federation, correctly predicting that it could only happen after decades of conflict.

Discovery takes place 10 years before the Original Series, so this is a great place to begin. It’s also a helpful reminder that the Klingons have changed a lot throughout the franchise. The original Klingons basically looked like humans, and Kor is more cerebral than the bloodwine-quaffing barbarian fighters of The Next Generation.

Star Trek III and V both involve Klingons, but the sixth movie is the most significant. It’s the last appearance of the Original Series crew, now in their 50s and 60s. As the Klingons and Federation try to broker an alliance, Kirk’s crew must defeat a conspiracy designed to ruin the peace talks.

Released in 1991, The Undiscovered Country is a thoughtful conclusion to Star Trek‘s Cold War politics. It’s also one of the best Star Trek movies, with sensitive characterization for the aging heroes during a time of great upheaval.

“Heart of Glory,” Star Trek: The Next Generation

Worf is the most prominent Klingon in Star Trek, introduced in TNG as the first Klingon officer in Starfleet. Raised by human parents, he occupies a similar role to Spock, whose half-human heritage made him an outsider to both humans and Vulcans.

Many Worf episodes are about him searching for his cultural identity, caught between his Klingon warrior philosophy and his loyalty to Starfleet. “Heart of Glory” takes place in TNG‘s rather clunky first season, so it’s a little slow-moving. However, it provides important insight into Worf’s backstory, as he’s confronted by two traditional-minded Klingons during a rescue mission. It illustrates how Klingons struggle to find a sense of honor during peacetime, a fundamentally alien idea to Captain Picard’s diplomatic mindset.

“Sins of the Father,” Star Trek: The Next Generation

When the Enterprise hosts an officer from the Klingon fleet, the crew faces an instant culture-clash. Worf is sensitive to other Klingons perceiving him as weak or “too human,” but the situation quickly moves beyond mere social awkwardness. The Klingon officer informs Worf that his dead father is accused of betraying the Empire, drawing Worf into a court case to defend his honor.

Worf’s backstory involves a historic moment in Klingon/Federation relations. His parents died in the Khitomer Massacre, where Federation ships saved Klingon civilians from a Romulan attack, leading the Klingons to respect the Federation as potential allies. By accusing Worf’s father of betraying the Empire at Khitomer, this episode forces Worf to confront the dark side of Klingon politics, and his role as an outsider.

(For more about Khitomer, I recommend the fantastic alternate-universe episode “Yesterday’s Enterprise,” taking place in a timeline where the Klingon war never ended.)

“The Emissary”/”Reunion,” Star Trek: The Next Generation

These two episodes star Worf’s love-interest, a half-Klingon named K’Ehleyr. She’s a Federation ambassador, and both stories concern diplomatic relations with the Klingon Empire. “The Emissary” involves a lost Klingon ship whose crew believe they’re still at war with the Federation. Then “Reunion” introduces some key figures who dominate Klingon politics throughout TNG and Deep Space 9. Picard has to investigate the assassination of a Klingon leader, tying into the impact of Worf’s court case in “Sins of the Father.”

Since most Klingon episodes involve Worf, we see a lot from his perspective as an outsider—and as a man. K’Ehleyr allows the show to explore his awkward attitude to women and romance, positioning her as a more progressive and laid-back character. Think CJ Cregg from The West Wing, but with a Klingon temper.

“The Way of the Warrior,” Star Trek: Deep Space 9

Worf moves to Deep Space 9 in season 4, joining the crew of a space station in the midst of an interplanetary conflict. This marks a turning point for the show, launching into epic power struggles between the Federation, Klingons, Cardassians, and other alien factions. In “The Way of the Warrior,” the Klingon fleet attacks the nearby Cardassian homeworld, kicking off a long-running war story with several key Klingon characters. A good choice if you enjoy space battles!

Klingon war hero Kor (played by the same actor as Kor in the Original Series) invites Worf and another DS9 officer, Jadzia Dax, to hunt for a long-lost Klingon artifact. With hints of Indiana Jones, this is a fun standalone adventure with roots in Klingon mythology. It’s also a great episode for Dax, an alien who retains memories of her past lives, and is personally familiar with Kor and many Klingon traditions.

Like Worf, Spock, and several alien characters in DS9, Voyager’s Klingon crew member is caught between two worlds. B’Elanna Torres is a half-Klingon Starfleet engineer who began as a Maquis freedom fighter, and she dislikes her Klingon heritage. In “Barge of the Dead,” she has a vision of her mother in the Klingon afterlife, cursed because B’Elanna has rejected her Klingon identity.

Voyager isn’t generally praised for its writing, but this episode came from an exciting creative partnership: Battlestar Galactica mastermind Ronald D. Moore and Voyager/DS9 staff writer Bryan Fuller, who went on to create Star Trek: Discovery. As a mythology-infused psychological drama about death and identity, you can see hints of Fuller’s later work on Hannibal and American Gods. It’s also a refreshing change from all those Worf episodes, because it’s all about women.

“Once More unto the Breach,” Star Trek: Deep Space 9

DS9‘s later seasons see a marked improvement in writing, acting, and production values for the franchise, developing into a wartime epic with complex character arcs and a serialized plot.

“Once More unto the Breach” takes place in season 7, and includes a spoiler for a major character death. Otherwise, it can work as a standalone episode. Written by Ronald D. Moore, it marks the return of the aging Klingon hero Kor. Despite his legacy, Kor has been refused command of a ship in the Klingon fleet, and Worf tries to find out why.

At this point, Star Trek‘s writers had a much more thoughtful attitude to Klingon politics, exploring the class system behind their warrior culture. After all, not every Klingon can be a soldier or the heir to an aristocratic house. If you’re OK with spoilers, you can also try the Klingon wedding episode “You Are Cordially Invited.” And, for that matter, all of DS9‘s last four seasons.