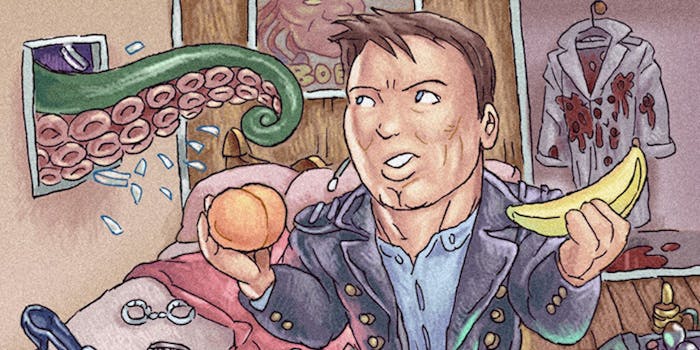 You too can learn how to make Alien Xenomorph Eggs.

If you’ve ever been cooking and wished your food was just a little more geeky, you’re not the only one. Fans of all different fandoms look for ways to create meals inspired by their favorite books, movies, video games, TV shows, and more. It’s a quest that has resulted in the publication of numerous official and unofficial cookbooks with recipes taken from various areas of pop culture, as well as websites made by fans dedicated to creating these recipes.

Chris-Rachael Oseland is the mastermind behind one such website, Kitchen Overlord, which offers a wide range of geek-inspired recipes. Now she’s hoping to bring a more colorful version to your kitchen with the help of Kickstarter. The Austin-based freelance writer has already published a few unofficial geek-themed cookbooks, including the Doctor Who-inspired Dining With the Doctor: The Unauthorized Whovian Cookbook, but with this crowdfunding campaign she hopes to create a unique cookbook with 50 fully illustrated recipes that are easy to make and represent a variety of fandoms, from Alien to World War Z.

“I want this to be a fun coffee table book geeks can show off to their friends,” Oseland told the Daily Dot. “And, if they’re a little afraid of the kitchen or just want something iconic to take to a party, a book they’ll find genuinely helpful.”

This interesting mix of cookbook and comic book-style art comes via artist Tom Gordon. While Oseland and Gordon have never met in person, Oseland has admired Gordon’s work for years, and he was on the top of her dream list for illustrating the book. When he said yes to the project, she was blown away.

“I am completely in love with the end result,” she says. “When I sent him the first recipe, I had no idea what he’d produce. The artwork came back and it felt like he’d read my mind. I’m afraid he’s spoiled me for all future artists.”

Together the two brainstormed ideas for the illustrated cookbook, creating separate lists they then compared. When they discovered anything overlapping on their lists, it automatically made it into the book. Oseland then let herself indulge and include recipes from her beloved Doctor Who and Dune before focusing on diversity. She wanted to make sure recipes represented many different periods in geek history and different subgenres, making tough decisions about what to include, such as The Time Machine by H.G. Wells or Necronomicon by H.P. Lovecraft.

“In the end, I had to balance history with popularity and honestly, the ease of creating an iconic, instantly recognizable food,” Oseland explains. “Every fandom was like that. Narrowing down which comics, which videogames, and which iconic books was tough—especially when I then had to figure out how to make recipes fit the fandom. I had a lot easier time with the TV shows, since there’s both a smaller selection and a more commonly accepted canon of classics.” 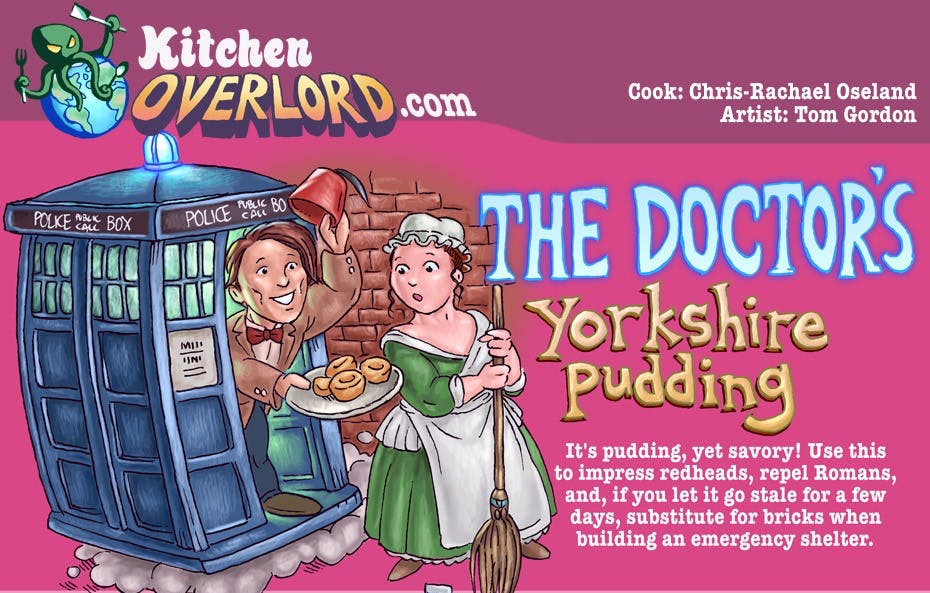 Diversity in dietary options was also considered, so the cookbook could include recipes that were gluten-free, lactose-free, and vegan. Oseland said developing the recipes took both experimentation and imagination. Occasionally a recipe would be mentioned specifically in a show or be instantly obvious, such as the Doctor’s Yorkshire Pudding. If you’re wondering how these fandom foods compare to those you can find online, according to Oseland, what always set her recipes apart is that they’re easy and iconic.

“When you see my Breakfast S.H.I.E.L.D., you instantly know this is a Captain America recipe,” she says. “What else could it be? The R’yleh Easy Cthulhu Pot Pies can’t be anything but a tentacle monster here to fill your belly with madness, though they’ll have to fight for room with the Alien Xenomorph Eggs. All three of those recipes have a small list of ingredients, only a few steps, and still come out instantly recognizable to your fellow geeks.”

If the quick funding of her campaign is any indication, there’s certainly a desire for more unique cookbooks with geeky themes. The Kickstarter was fully funded just five days after it launched. Oseland said the response has been wonderful.

“The comments are full of people bidding to have their favorite fandom included in the book,” she adds. “Right now, it’s a tie between Futurama and a second Firefly recipe and every private message has been full of enthusiasm. In fact, I printed out a couple to tape under my monitor as inspiration.”