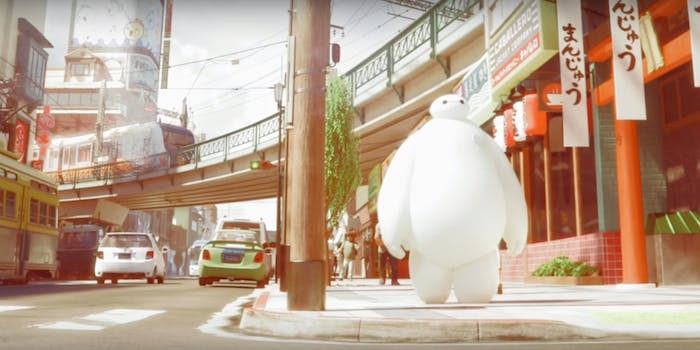 The game may not have a release date, but it keeps getting better and better.

Disney made Kingdom Hearts fans swoon at its D23 fan convention this weekend when it revealed that Baymax and San Fransokyo from Big Hero 6 will appear in the series’ third installment.

The Kingdom Hearts series has had a devoted following since the release of the original PlayStation 2 game in 2002. They feature a combination of action, role-playing, and puzzles, and they star a mix of original characters, characters from the Disney animated films, and characters from the Final Fantasy universe. Some of the levels in the games are drawn from Disney films, and the series is continuing that theme with a Kingdom Hearts III level based on the city of San Fransokyo from Big Hero 6.

Roy Conli, a producer at Walt Disney Animation Studios, explained why Big Hero 6 was such a great fit for a Kingdom Hearts game.

Kingdom Hearts III will be the third original game in the series to appear on consoles. Several games were released for handheld systems, and older games were remixed for modern platforms.

The new title, which was announced at E3 2013, does not yet have a released date, but it will be available on PlayStation 4 and Xbox One.