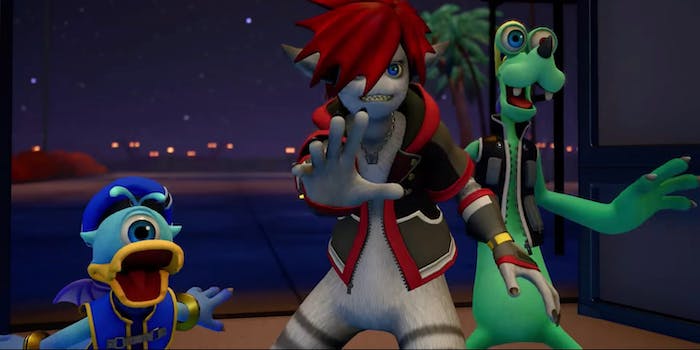 We also heard a preview of the new theme.

The latest trailer for Kingdom Hearts 3 debuted at D23 in Japan over the weekend, giving fans—who have been waiting years for the game—an even greater in-depth look at the game’s mechanics and brand new worlds.

One of the biggest reveals of the new trailer? Easily the new designs of Sora, Donald, and Goofy as they try to blend into Monsters Inc.’s Monstropolis. They interact with Sulley and Mike Wazowski, who are shocked at how chill the trio are about seeing a human.

Monsters Inc. is just one of the many worlds players will get to explore in Kingdom Hearts 3. The other levels are set in the worlds of Big Hero 6, Tangled, and Toy Story—the latter two feature prominently in the trailer. We also catch a glimpse of the gameplay, which includes several threads from previous Kingdom Hearts games such as the Dream Eaters from Dream Drop Distance and the new ability to fight alongside characters like Rapunzel without having to bench members of your own party.

For those who follow the series’ long and overarching plot that blends new characters, Disney properties, and even characters from the Final Fantasy franchise (Square Enix makes both Final Fantasy and Kingdom Hearts), the preview also includes a look at Organization XIII’s Marluxia and Vanitas, who featured in the Kingdom Hearts prequel game Birth By Sleep.

Square Enix also debuted the theme song for Kingdom Hearts 3, “Don’t Think Twice,” which is performed in English and Japanese by Hikaru Utada. It released clips that feature incomplete versions of the song in Japanese and English with an intriguing cutscene between Mickey and Riku.

While Square Enix didn’t reveal an exact date, Kingdom Hearts 3 is set to be released for PS4 and Xbox One sometime in 2018.