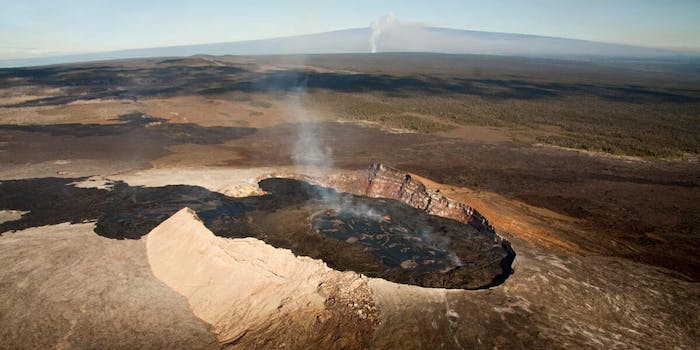 The footage from Hawaii’s erupting volcano is spectacular and terrifying

Lava soared as high as 125 feet into the air.

Kilauea volcano in Hawaii erupted for the first time in 35 years on Thursday, causing nearly 1,500 locals to evacuate from their homes, according to the Associated Press. And the videos of the lava flow are spectacular.

Already, photos published by local news and footage shared on social media show smoke filling the air, debris flying down from the top of the volcano, and lava shooting into the sky.

From @HawaiiNewsNow this is live from a drone. Leilani Estates has an emergency evacuation order. pic.twitter.com/nxbXlR1R8K

#BREAKING: A drone captured the lava inching its way towards Leilani Estates.
Emergency sirens will be sounded by civil defense across Hawaii Island.

MASSIVE ERUPTION AFTER 5.0 EARTHQUAKE IN KILAUEA VOLCANO, HAWAII | May 3… https://t.co/ub2RqUpgFu via @YouTube

New fissure opens in Leilani Estates on the Big Island of Hawaii.

This video was taken just moments ago by my best friend who lives on the island… he said the fissure is making 'a loud wooshing sound' and is spewing lava at least 20 feet into the air.

The eruption shortly followed a 5.0 earthquake, as well as hundreds of smaller-scale quakes, earlier on Thursday and ended about 6:30pm local time, after creating a fissure that sent lava soaring as high as 125 feet into the air. The Hawaiian Volcano Observatory stressed lava outbreaks remain a possibility, according to Hawaii News Now.

“The opening phases of fissure eruptions are dynamic and uncertain. It is not possible at this time to say when and where new vents may occur,” the observatory said in its latest update. “Areas downslope of an erupting fissure or vent are at risk of lava inundation. At this time, the general area of the Leilani subdivision appears at greatest risk.”

While there have no immediate reports of injuries, the U.S. Geological Survey raised the volcano’s alert level to warning status—the highest possible—meaning a hazardous eruption is imminent, underway, or suspected. Fire officials also warn they’ve detected extremely high levels of dangerous sulfur dioxide in the area.

Specifically, areas downslope of the eruption—such as the Leilani Estates—are most at risk of getting drowned in lava.

Community centers have been opened to provide shelter for evacuees, and Hawaii’s governor activated the National Guard to help provide security to about 770 structures left empty when residents sought shelter. FEMA has also begun mobilizing resources, according to Sen. Brian Schatz.

I just got off the phone with FEMA and they are mobilizing resources for the Hawai`i Island lava event. They are monitoring for forest fires, power outages, and water supply disruption.

Out of the five volcanoes that form Hawaii, Kilauea—whose name means “spewing”—is the most active. The first well-documented eruption of the volcano occurred in 1823, and since that time, the volcano has erupted repeatedly. Most of Kilauea’s activity has been nonexplosive, but a 1924 eruption spewed ash and 10-ton rocks into the sky, leaving one man dead. The last eruption in 1983 was the longest in recorded history and lasted for decades, destroying many homes.

Volcanoes are formed after magma rises through cracks or weaknesses in the Earth’s crust and pressure builds up inside the Earth, according to the BBC. Once this pressure is released as a result of plate movement, magma explodes to the surface causing a volcanic eruption. The lava from the eruption then cools to form a new crust and over time, after several eruptions, the rock builds up and a volcano forms.