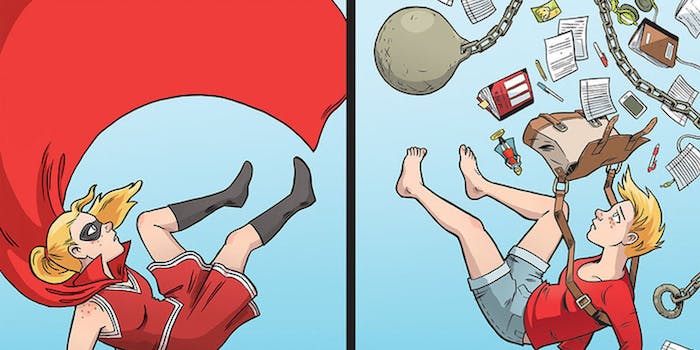 In just a short nine hours, Strong Female Protagonist went from a popular webcomic to an upcoming graphic novel thanks to a quickly funded Kickstarter. On day one the crowdfunding campaign reached its $8,000 goal and as of Thursday has raised more than $45,380, fulfilling four stretch goals. Writer Brennan Lee Mulligan and artist Molly Ostertag have been floored by the response and are extremely grateful to their supporters.

“I can look at the number of people who check the site each day, but it’s just a number. Seeing the names of our fans, getting their support, and hearing from them has been a truly wonderful experience,” Ostertag told the Daily Dot.

Strong Female Protagonist follows the story of middle-class American retired superhero Alison Green who has super-strength and invincibility. She also has a crippling sense of social injustice and while going to college tries to figure out how to improve problems larger than the supervillains she battles. It deals with a number of superhero tropes and the idea of what exactly makes a female protagonist strong.

“Molly and I both had problems with the use of that term and the characters it tended to describe, so the early ideas of the comic were almost like a writing exercise. How do you create a character who is ‘strong’ in every sense of the word? What are all the various connotations of the word ‘strong’ in describing a literary character?”  Mulligan said.

The comic’s exploration of this concept and great portrayal of a female character is one of the reason’s for its popularity. Readers of traditional mainstream superhero comics, especially the often ignored female fans, are still starved for positive representations of women. Ostertag said when she reads the occasional superhero comic she’s often frustrated with issues of portrayal and diversity.

“It’s hard to tell if things have changed in the last few years—having a comic called Strong Female Protagonist means that every article on the subject gets sent to me, so I live in happy Internet bubble full of strong female protagonists. I think we’re reaching a tipping point in pop culture, not just comics, where we’ll start seeing more and more women. The Internet seems to have been helpful in squashing the idea that just boys like to read comics about superpowers,” she said.

Ostertag and Mulligan agree that what needs to change about how women are represented is the inclusion of more female characters.

“Oversexualization, damsels in distress, wet blanket wives, all of these harmful characterizations of women in media are problematic because there are only a handful of women in so many of our most popular stories,” Mulligan said. “There is nothing inherently wrong with having a female character who’s a bombshell, but if she’s the only woman in your story, you are now making a political statement about women.”

While there are other webcomics and indie comics helping fill the void left by more mainstream media when it comes to diverse and well-rounded characters, Strong Female Protagonist in particular has made a powerful impact as evidenced by their successful Kickstarter.

“I write Strong Female Protagonist on a little Macbook in my bedroom, and it’s always felt so small and personal. Collaborating with Molly is such a reward in itself that to look at the names of over 1,300 human beings who have donated their hard-earned cash feels warm and gooey and like probably I’m going to get in trouble because this is too nice of a thing to happen?” Mulligan said.

Art by Molly Ostertag via Kickstarter