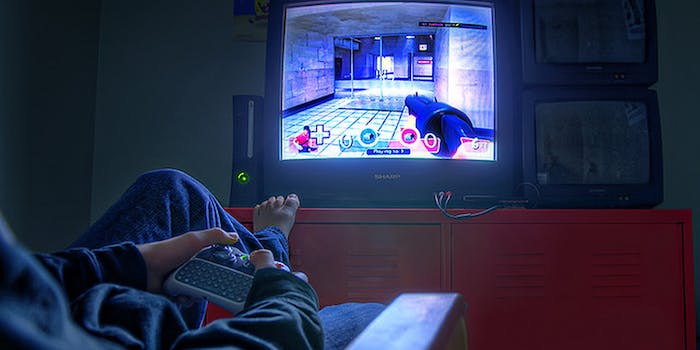 The crowdfunding platform was supposed to help us get more Indie titles... but this research says we're actually just getting empty promises.

Kickstarter has been billed as a godsend for the indie gaming community. Unlike other artistic endeavours, game development can be a costly proposition. So the ability to crowdfund the start-up money is crucial.

But despite some high profile success stories, a new study suggests that a fruitful Kickstarter campaign is no guarantee that a game will ever come to fruition — at least in the time frame promised by developers.

A new study from Unsub, a blogger who’s been monitoring the relative success of video games funded by Kickstart for years, reports that only about one in three games entirely funded by crowdsourced donations through the site actually fully deliver on their promised project. When partial deliveries are taken into account, still only half of all successful campaigns produce any sort of gaming content by their promised delivery date.

“What I find interesting in looking at these figures is that even though the number of successful Kickstarter video game projects has increased since 2010, the proportion of those delivering something has remained pretty consistent since 2010,” the study reads.

Unsub studied 366 successfully funded campaigns between 2009 and 2012. During that time, about 37 percent of funded titles were fully delivered as promised to their investors. About 8 percent were able to muster a partial delivery of something like an alpha version or a single level. There was a combined 5 percent formal cancellation or hiatus rate for other games, meaning many more are left in limbo without formal explanation for their delay.

One might assume these failed games result from developers not setting their sights high enough and raising the necessary funds. But in comparing success and failure rates against the level of money raised, the rates were fairly consistent. And overall, the majority of finished games actually sprung from campaigns that raised less than $20,000. 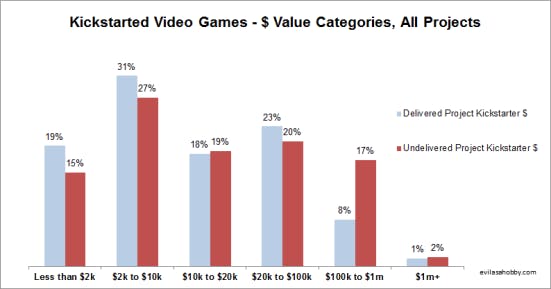 Speaking of dollars and cents, perhaps the most damning allegation from Unsub’s study is the amount of money taken in by developers versus the value generated. Not including Kickstarter games that never see the light of day, a crunching of the numbers found that delivered projects only generated $16.9 million in value after taking in a combined $21.6 million in donations. 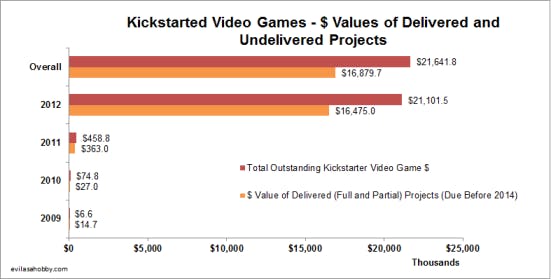 But despite this dismal return on investment, donors are still lining up to fund independent game projects through the crowdfunding network. The number of successfully funded campaigns has been going up every year. In 2009, only five video game projects were funded through the site. In the first 10 months of 2012, 207 titles were fully financed.

Though delays are certainly to be expect in video game development, even when professional game studios are involved (Duke Nukem Forever, anyone?), Unsub said these trends are important for potential investors to be aware of before sinking their cash into a project.

“A number of these undelivered titles may be in alpha or beta status, on Desura or Steam Early Access,” Unsub writes. “That’s fine, but it’s generally not what backers are looking for when they are promised a full title. (It should also be noted that a number of these undelivered projects also seem to have developers who have stopped talking to their backers and where the ‘official’ website no longer works.)”

When a Kickstarter game fails to come together, it can leave many of the investors feeling ripped-off. Such was the case of CLANG, a much buzzed about sword fighting game that raised more than half a million dollars on Kickstarter, becoming one of the most successful campaigns the site has ever seen. But this summer, the project fizzled out amid reports that the developers had overshot their budget and couldn’t raise enough supplemental funds to finish the game.

“Kickstarter was supposed to be your funding!” CLANG investor Zarlan wrote at the time the developers officially gave up on the project. “If you were only using Kickstarter as a start, to get further funding … you have basically deceived all your backers!”