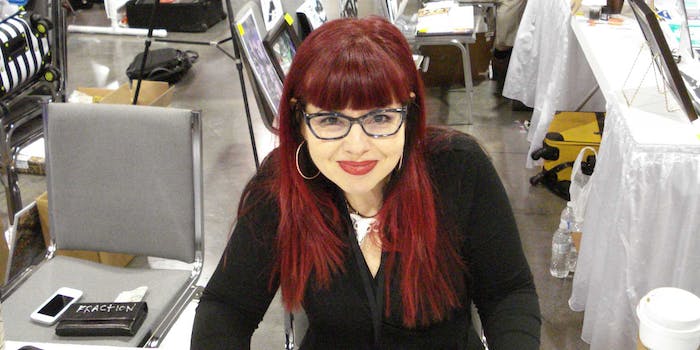 Don't worry—Captain Marvel will live on with another writer at the helm.

After transforming Carol Danvers from a Marvel side character into a cult favorite, writer Kelly Sue DeConnick is moving on from Captain Marvel.

DeConnick rebooted Captain Marvel in 2012, quickly attracting a dedicated fan community known as the Carol Corps. But after Marvel Comics wraps up its Secret Wars event storyline this summer, DeConnick will be stepping down to focus on other projects.

@CaptMarvelNews So hard to go, but it's time.

During HeroesCon this weekend, DeConnick admitted that after Secret Wars, she was offered the choice to “dig in for three more years or drop the mic.” She went for the latter option, leaving Captain Marvel on a high note and allowing someone else to take over the post-Secret Wars relaunch.

DeConnick will continue writing Pretty Deadly and Bitch Planet for Image Comics, and she recently signed a TV deal to develop comic-book adaptations alongside her husband Matt Fraction.

For many readers, DeConnick’s Carol Danvers is the definitive Captain Marvel—a character who will soon become the star of Marvel’s first female-led movie franchise. The Carol Corps probably wouldn’t exist without DeConnick’s constant encouragement on social media (which has since inspired an enthusiastic following for Bitch Planet as well), but Captain Marvel fandom has grown strong enough to survive without her in the long run.

Photo via discord the lunatic/Wikimedia Commons (CC BY SA 3.0)