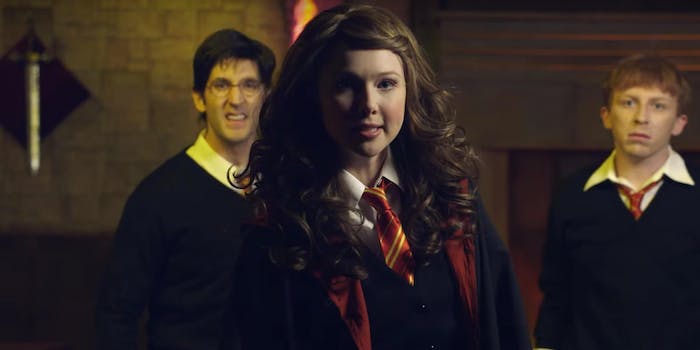 Hermione and Katniss face off in a magically awesome rap battle

Katniss has street smarts, but Hermione's vocab is still bigger.

It’s win or die in this hardcore rap battle between two of our most beloved modern Young Adult heroines. Hermione may be the sidekick in her own story, but we still named her the greatest YA heroine of all time. (Katniss came in fifth.) But our favorite girl on fire is clearly having none of that. She throws down in true District 12 style in this parody from YouTubers Whitney Avalon and Molly C. Quinn—along with a host of background guests who look eerily like the casts of their respective fantasy film franchises.

Obviously neither Katniss nor Hermione are princesses—the name’s an obvious homage to the epic Disney princess rap battles of yore. But more importantly, neither of them have time to waste dropping verses when they could be joining together to fight the forces of evil (though it’s a shame, because these rhymes are hardcore). It seems like Hermione ekes out the win, but it’s a clear draw between these two in our hearts.

Thankfully, there’s a much happier (and slashier) conclusion to this duel, as our heroines decide to make love, not war. Sign us up for all the crossover fanfic.