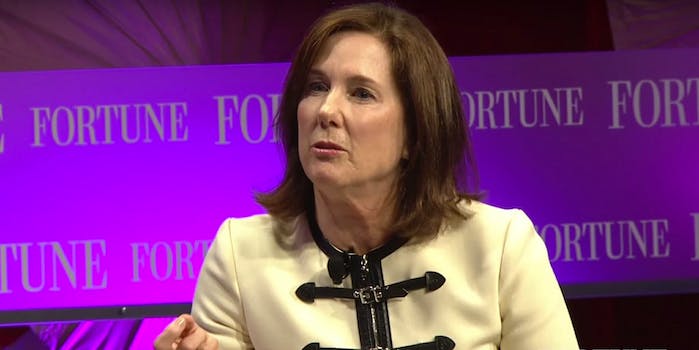 Although every director hired for Star Wars so far has been a man, Lucasfilm president Kathleen Kennedy says that she’s confident a woman will someday direct a Star Wars movie.

Kennedy, who started her career in Hollywood as a secretary, became a constant collaborator with Steven Spielberg and eventually succeeded George Lucas as president of LucasFilm. So she knows a thing or two about the gender gap in the industry. She had previously been a camera operator at a local San Diego TV station—a job she later found she only got because the station had to hire a woman due to a lawsuit. But to her, the inequality hasn’t changed much in the decades since the 1970s when she started in the business, noting at the Fortune Most Powerful Women Summit on Tuesday that there wasn’t a single woman operating a camera at a recent Saturday Night Live taping.

“People in powerful positions are not trying hard enough [to bring women into the industry] and there are an alarming number of women who are not able to get those jobs,” Kennedy said.

Since taking over for Lucas, Kennedy has made strides in creating opportunities for women in the industry. Kennedy explained that six of eight members of the story team on The Force Awakens are women while 50 percent of the executive team are women. It’s also important for her that there women are able to grow not just in executive positions, but also working on Star Wars films and starring in them. It’s already affecting how those stories are told.

But there’s still at least one area where LucasFilm lacks female representation: There has yet to be a woman director for a Star Wars movie. Kennedy is confident that it will happen one day, and while she doesn’t doubt that there are plenty of women working in Hollywood who were shaped inspired by Star Wars, they’re not the ones who approach her most often.

“I have a huge number of men who call me constantly and tell me how much of a Star Wars fan they are,” Kennedy said. “How much they want to get involved in anything to do with Star Wars. I don’t have a lot of women who call and have those conversations with me.”

A recent study revealed that women only made up 7 percent of the directors who worked on the 250 highest-grossing movies, a decline from the late ’90s. The number of producers, executive producers, editors, writers, and cinematographers working today is also low. The gender gap is so bad that the ACLU has requested an investigation into Hollywood’s hiring practices.

Even Jennifer Lawrence, who is the highest paid actress in Hollywood, highlighted the wage gap and the fear of speaking up about it in a letter she wrote for Lena Dunham’s newsletter Lenny on Tuesday.

When negotiating for American Hustle, she didn’t fight for the salary she deserved because she “didn’t want to seem ‘difficult’ or ‘spoiled.’” Later she found out how much more money her male costars negotiated for American Hustle during the Sony hack. She also referenced actress and director Angelina Jolie, who was called a “minimally talented spoiled brat” and a “rampaging spoiled ego” in emails by Scott Rudin.

There is a long history in Hollywood, in Silicon Valley, and other areas of the workforce of women being called “bossy” while male colleagues with drive are rewarded or called a “leader.” Even Kennedy, who has made serious strides in the business the past few decades, has been described as “intimidating” and “controlling” by people who know her.

The fact that Kennedy is using her power as Lucasfilm president to give women executive positions and hiring them to help create Star Wars films is encouraging. But encouraging female writers and directors to feel like those jobs are attainable and deserved seems equally as important.