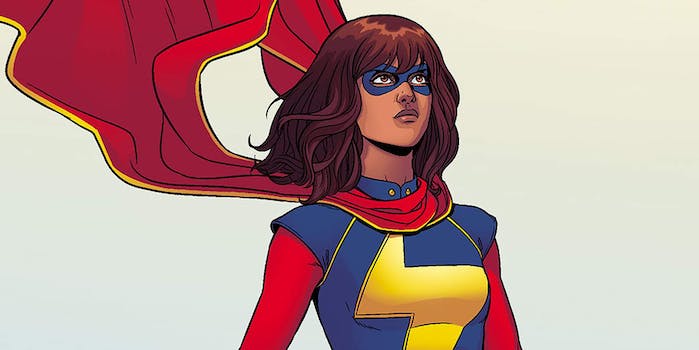 Welcome to the Avengers, Ms. Marvel!

Kamala Khan may not have her own live-action comic adaptation (yet), but she’ll be making her TV debut in the third season of the animated show Avengers Assemble.

Comic Book Resources reports that Kamala Khan, the teen heroine of bestselling comic Ms. Marvel, will join the cast of the ongoing Avengers animated series, along with Ant-Man, Captain Marvel and Black Panther.

The show has been retitled Avengers: Ultron Revolution, and its plot synopsis teases the return of Ultron and the introduction of Baron Zemo, the Masters of Evil, the Inhumans, and Kang the Conqueror.

The animated Avengers series does not take place in the same universe as the live-action movies, but it shares many similarities. The main Avengers team is the same (plus Falcon), and now Marvel is introducing several heroes who have their own franchises coming up: Ant-Man, Captain Marvel, Black Panther, and the Inhumans.

Could the addition of Kamala Khan mean Marvel is gearing her up to make a live-action appearance elsewhere? Maybe. But it’s equally possible that they’ve just decided to capitalize on her popularity among Marvel comics readers.