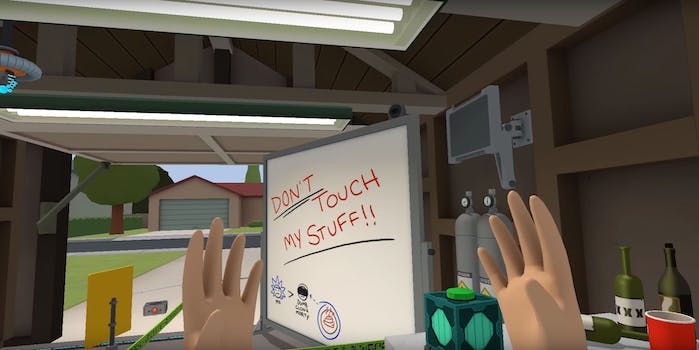 You won’t need a portal gun to enjoy these adventures.

Soon, you can play a game about stepping through portals into strange, alien worlds with Rick and Morty by putting on a virtual reality rig and stepping into a VR simulation.

Justin Roiland—co-creator of Rick and Morty, the hit Adult Swim cartoon about a grandfather and his grandson who travel through space and wreak havoc—has co-founded a virtual reality game studio. His partner in the new venture, Tanya Watson, formerly worked at Epic Games as an executive producer and worked specifically on the first three Gears of War games, Bulletstorm, and Fortnite.

The new studio is named Squanchtendo, a combination of Nintendo and “Squanchy,” a recurring character on Rick and Morty.

Roiland, an avowed gamer, has had his eye on VR gaming since the launch of the Oculus Rift Kickstarter, according to Gamesindustry.biz. Roiland and Watson met through a mutual connection with Cliff Bleszinski, former design director at Epic Games on the Unreal and Gears of War series.

Roiland, along with storyboard artist Erica Hayes, made an appearance on June 28 in Altspace VR, a social game on the Vive. Roiland took questions from audience members who were also in the Altspace simulation and put on an impromptu performance as Rick and Morty.

Rick and Morty: Virtual Rick-ality is not being developed by Squanchtendo, however. Roiland is collaborating with VR development studio Owlchemy Labs on the game, in the interests of getting Virtual Rick-ality released as early as possible.

Squanchtendo has teased a game reveal at the Penny Arcade Expo West convention taking place in Seattle from Sept. 2-5.