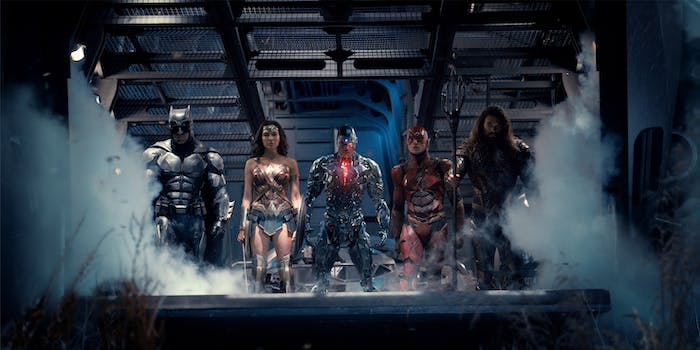 Rotten Tomatoes said it wouldn't publish an early score—and then it leaked.

A day after Rotten Tomatoes announced it would not release its Tomatometer score for DC’s Justice League early, it appears a third-party app may have already leaked it.

Critics’ reviews of the movie started appearing online Wednesday morning, but the movie review aggregator held off on publishing an official score, instead saying it would announce the score on the site’s upcoming web show See It/Skip It on Thursday.

Join us for the #JusticeLeague Tomatometer Reveal on the next #SeeItSkipIt only on Facebook Watch pic.twitter.com/bbCqIPkBky

Well, it may have been for naught. Ticket purchasing app Flixster listed Justice League‘s Rotten Tomatoes score on the movie’s page Tuesday with the superhero film scoring a mediocre 50 percent, 10 points below a certified “fresh” rating.

The score has since been taken down, although screenshots are floating around as fans eagerly wait to see if the film will be another incoherent, bloated action flick or something more akin to Wonder Woman, which shattered the box office this summer and earned a 92 percent on Rotten Tomatoes.

As always, fans speculated about what the early score could mean for the film.

This also rattled the conspiracists who are convinced critics are biased toward Marvel over DC.

Some are concerned another poorly received DC Extended Universe film could cause Warner Bros. to dial back the franchise. There are rumors that DC Entertainment might pivot from expanding the linked DCEU to focus on stand-alone films after the success of Wonder Woman, but for now, there’s no reason to think the company might stop making DC movies altogether.