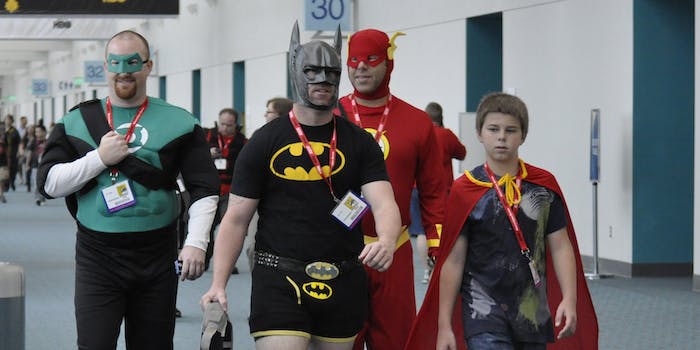 This isn’t a leaked script for the ‘Justice League’ movie, but we wish it were

Something claiming to be the Justice League movie script has just been leaked online, and oh boy are we excited.

Of course, the Justice League movie is slated for 2018 and doesn’t officially have a writer yet, but for some reason many people have decided that this script “leak” could be the real deal.

Just to be clear, it isn’t the real deal. But that doesn’t seem to matter because more than 58,000 people have viewed the script already, eager for spoilers. So in the interests of vital pop-culture journalism, we’ve taken a gander at the 192-page masterpiece.

First of all, we have the working title of the movie, plus the writer’s intriguing nom de plume: Apocalypse Nightshade.

“A Heroes Call” isn’t exactly a shining example of grammatical correctness, but on the other hand, neither were Star Trek Into Darkness or Inglourious Basterds. Let’s be charitable and assume that this is just an early draft, and no one bothered to correct the glaring error on the title page.

Sadly, the grammar and spelling seems to continue in that vein. The first scene, for example, has supervillain Darkseid enquiring about “the inhabitance” of Earth, and someone replying, “A magnitude of species.”

Moving on to more exciting scenes, Superman’s first appearance is a doozy. We look forward to seeing Henry Cavill recreating this classic moment where Superman slaps a Japanese pimp.

At this point, it should be very clear that this is not the real Justice League script. Even Man of Steel director Zack Snyder (previously known for 300 and Sucker Punch) would not have Superman beat up a pimp and burn the “S” symbol into his chest.

However, wouldn’t it be amazing if this were the real Justice League movie? The crowning glory of Warner Bros.’ Batman/Superman reboot trilogy? As in, Zack Snyder and Christopher Nolan spend five years and two movies building up the groundwork of a serious, gritty superhero franchise, only to introduce characters like Toyman, and lines like this:

To clarify, Grodd is literally a gorilla.

Honestly, the most impressive thing about this “leaked” script is the fact that Apocalypse Nightshade managed to trick 58,000 people into clicking on (if not actually reading) a mediocre JLA fanfic. Well done, dude. Well done.