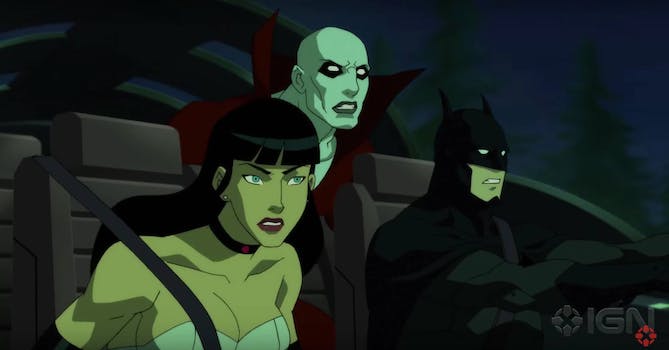 See the first trailer for the R-rated ‘Justice League Dark’

DC's next adults-only animated movie is on the way.

DC Entertainment is doubling down on its R-rated animated features.

Hot on the heels of the Batman: The Killing Joke, DC has released a new trailer for Justice League Dark, an animated movie aimed at adult audiences planned for early 2017. The movie gets its R rating for “some disturbing violence.”

According to IGN, which partnered with DC to debut the trailer, “Justice League Dark finds the world under attack from supernatural forces that prompts the Justice League’s Batman to seek aid from occult investigator John Constantine. Constantine forms a team of other supernatural superheroes—Swamp Thing, Deadman, Zatanna, and Etrigan the Demon—to help save the world.”

While Batman: The Killing Joke—based on a popular and dark graphic novel by Alan Moore—had a limited release in theaters, so far Justice League Dark is slated only for release on Blu-ray, DVD, and digital download. Its possible theatrical screening could pop up once the release date is announced.