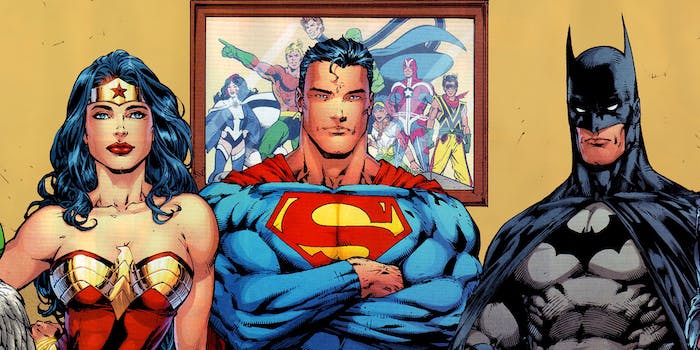 The ‘Justice League’ movie is happening but who will join the team?

It's going to be a long wait, let's hope it's worth it.

Confirmed in a report from the Wall Street Journal, Warner Brothers announced that the upcoming Batman/Superman movie (itself a sequel to Man of Steel) will be followed by the Justice League—plus several other titles.

The other DC adaptations haven’t all been named yet, but movies based on Shazam, Metal Men, 100 Bullets and Fables are all definitely in the works. This is kind of a weird lineup, although perhaps no weirder than Marvel’s decision to spend millions of dollars on a movie starring a tree, a talking raccoon, and that goofy guy from Parks and Rec.

Shazam is a relatively traditional superhero who was previously known as Captain Marvel, resulting in a lawsuit from Marvel Comics. 100 Bullets is a noir drama, the Metal Men are an obscure team of robots with anthropomorphized metal characteristics, and Fables is a long-running series inspired by popular fairytales and folklore. Fables is probably the most interesting announcement of the bunch, since the series has such a vast array of characters and storylines to choose from.

The Justice League movie will obviously star Batman, Superman, and Wonder Woman, continuing on from Zack Snyder’s untitled Batman/Superman movie in 2016. There’s no word on which other characters might be involved apart from Cyborg, who was just cast in a minor role for Batman/Superman.

Possible Justice League headliners include the Flash, Green Lantern, Aquaman, and the Martian Manhunter. However, it seems unlikely that Snyder would want to associate his movie with the critically panned Green Lantern adaptation that came out a couple of years back. As for the Flash, he’s anyone’s guess. The Flash is actually getting his own TV series later this year, but would Warner Bros. really want to have their movie link up to a CW show with a fraction of the audience? And what if it gets cancelled between now and 2016?

Finally, before you ask: No. Wonder Woman is not among the list of confirmed movie titles.

Gal Gadot is contracted to play Wonder Woman in three separate movies, which presumably means Batman/Superman, Justice League, and one more which may or may not be a solo feature. If Warner Bros. is greenlighting something as offbeat as Metal Men (seriously, read its Wikipedia entry if you enjoy having cartoon question marks float above your head), it seems increasingly likely that Wonder Woman will be getting her own movie before long. Perhaps Warner Bros. just didn’t want to announce it at the same time as all these other, smaller titles. Right?