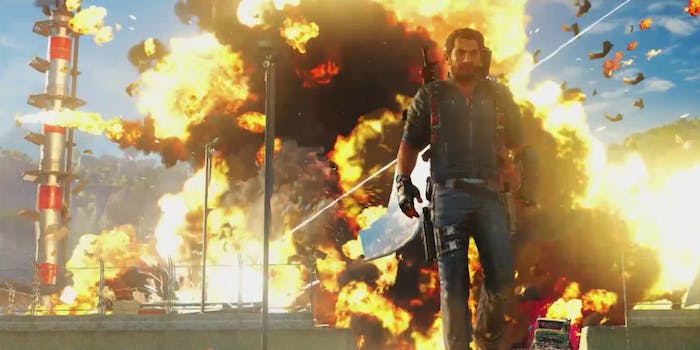 The new Just Cause 3 trailer is all about the explosions

Just Cause is an open-world video game series about fighting back against oppressive third-world regimes, that gives Grand Theft Auto a run for its money in the chaos department.

The new gameplay trailer released today for Just Cause 3 shows franchise hero Rico Rodriguez up to his usual antics, i.e. wing-suit skydiving onto moving a jet fighter and ripping the pilot out of the cockpit, using helicopters to hook up cars like wrecking balls, and surfing on vehicles screaming down the highway at high speeds while he shoots automatic weapons.

Rodriguez is an operative of a clandestine organization called “the Agency.” The jist of every game is that Rico gets dropped into a third-world nation on a mission to take down a dictatorial government. Freeing a country, whether it be located in the Caribbean, Southeast Asia, or in Just Cause 3 a Mediterranean island, always seems to involve destroying large parts of it.

Where massive damage is often incidental in Grand Theft Auto, it is the primary objective in Just Cause. The franchise prides itself on multitudinous opportunities for creative destruction, like using jet fighters as dumb-fire rockets, and strapping moving vehicles together with Rodriguez’s trademark grappling hook.

Now that Just Cause is heading to eighth-generation consoles, the amount and fidelity of chaos the game can support ought to skyrocket, compared to the first two games.