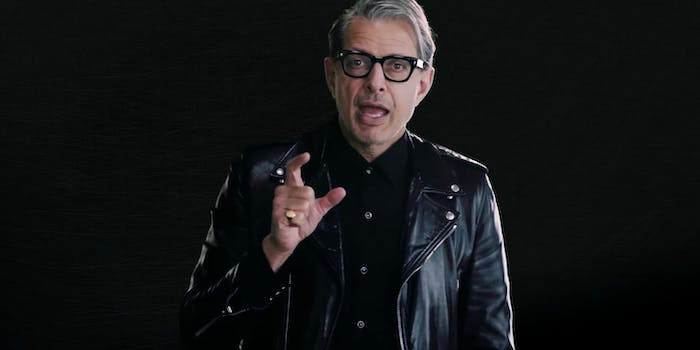 Jeff Goldblum is your guide in a new ‘Jurassic World’ game

We’ll soon be able to build our own dinosaur parks worthy of Jurassic Park—with the perfect guide to help us along the way.

Jeff Goldblum revealed in a new video that he’ll reprise his role as Dr. Ian Malcolm to help players in Jurassic World Evolution, a new game by Frontier that will put the controls of a dinosaur park in your hands. It will be available for PC, PlayStation 4, and Xbox One, and it will be the second Jurassic World game we’re getting after the recently announced Jurassic World Alive mobile game.

Although the trailer is light on actual footage of the game, you’ll have the ability to design and build the park itself, create dinosaurs, and set up different aspects like attractions for guests, research facilities, and containment areas. According to Frontier, everything you do in the game will have consequences, noting that every choice you make “leads to a different path and spectacular challenges arise when ‘life finds a way.’

It already has the Goldblum seal of approval.

“It gets 10 Goldblums out of a possible 10 Goldblums,” Goldblum said. “That’s my highest rating.”

Jurassic World Evolution will be released sometime this summer.