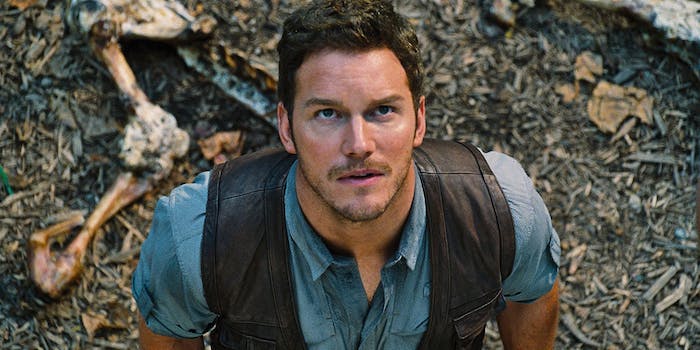 It's the mashup we Parks fans have been waiting for.

“Jurassic Parks and Recreation.” It had to happen.

Jurassic World is going to be one of the biggest movies of 2015, aided by Chris Pratt‘s success in Guardians of the Galaxy. But just because Pratt is an intergalactic superhero and part-time velociraptor wrangler doesn’t mean we’ve forgotten his comedy roots.

The “Jurassic Parks and Recreation” jokes started as soon as Pratt was cast in the movie, and now, finally, there’s a mashup trailer for the joke: Parks and Rec‘s Andy Dwyer in a dinosaur-heavy environment.

One of the awesome things about Pratt’s burgeoning Hollywood career is that he plays exactly the kind of characters Andy Dwyer might pretend to be. Star-Lord? Clearly Andy’s Halloween costume circa 1990. Jurassic World‘s Owen? Hello, his job includes riding a motorcycle through the jungle while surrounded by a pack of raptor pals. That sounds like a character made up by an over-excited 9-year-old, which is totally Andy Dwyer’s M.O.

Honestly, this makes us wish even more for another season of Parks and Rec after the one premiering next Tuesday. They could have done so much with those Jurassic Park references.