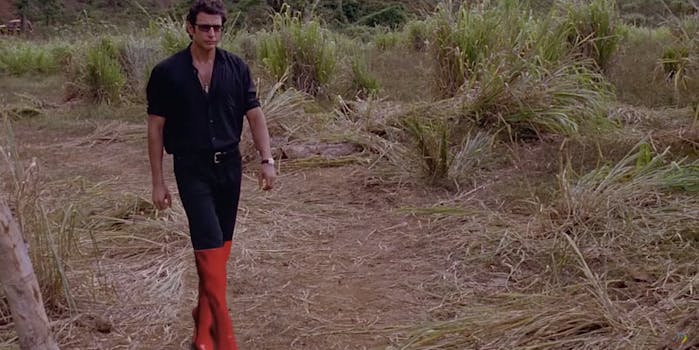 Everybody gets a pair of stilettos in ‘Jurassic Park: High Heels Edition’

As we all know by now, the scene-stealer in Jurassic World wasn’t a dinosaur, but rather a pair of treacherous stilettos.

High heels are so impractical and difficult to balance in that YouTube is full of tutorials for how to walk in them—and that’s on solid ground. Try wearing them to tromp through the jungle. Kathleen Turner found out how impractical high heels were for jungle adventures way back in 1984, so it makes no sense that three decades later Bryce Dallas Howard’s character in Jurassic World would have failed to learn the basic lesson “don’t wear impractical footwear to a dinosaur theme park.” Or really any theme park. When’s the last time you saw stilettos at Six Flags?

So just how ridiculous is it that a high-powered business executive wouldn’t kick off her boardroom shoes and put on some boots when she joined a rescue mission? Let’s find out!

Chicago film team XVP Comedy has created a parody promo trailer for a spoof “High Heels Edition” of Jurassic Park that showcases just how over-the-top high heels in the jungle can be—by putting them on everyone.

Of course, this parody might have the unintended effect of accidentally being awesome. After all, as annoying as the constant clacking of a movie full of stiletto-wearing characters would be, we would line up around the block to see Jeff Goldblum do that sexy runway walk in those red boots.

Seriously, where did he learn to walk like that? Maybe paleontology studies isn’t what we thought it was.