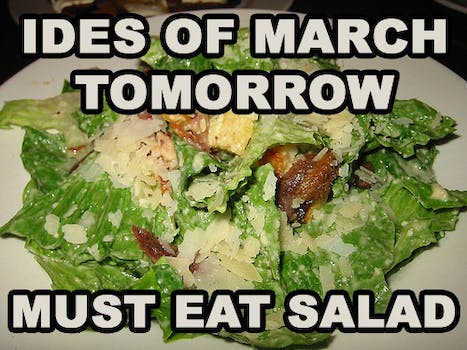 How Caesar fandom celebrated the Ides of March

It's the 2,057th anniversary of Julius Caesar's murder. Here's how his fans celebrated online.

History fandom: it’s a thing. And its main difference from regular fandom is that instead of mourning the fictional death of Sherlock Holmes on a TV show last year, history fans are usually centuries away from their current main squeeze. And right now, that’s Julius Caesar.

Today is the Ides of March, and Tumblr users are commemorating the 2,057th anniversary of Caesar’s murder at the hands of the Roman Senate. You can celebrate with some Roman cosplay, or even a topical meal: Caesar salad, stabbed 23 times with a fork.

Just don’t forget the true meaning of the day. As the Ides of March card from someecards puts it, “It’s not about just stabbing. It’s about coming together to stab in groups.”

Caesar fandom even ties in with the Internet’s most quotable movie, Mean Girls. It’s hard to get far online without hitting a Mean Girls macro, but Julius Caesar brings the meme full circle thanks to the movie’s direct reference to his demise.

For one day each year, the crossover Tumblr Mean Girls Of Rome makes perfect sense. Its motto? “Veni, inepte, ad forum imus.” (That loosely translates to “Get in, loser, we’re going shopping,” for those of you whose Latin is a little rusty.)

Oh, and if you’re not into Caesar salad, don’t worry. There’s always the option of blood-spattered Ides Of March cake.