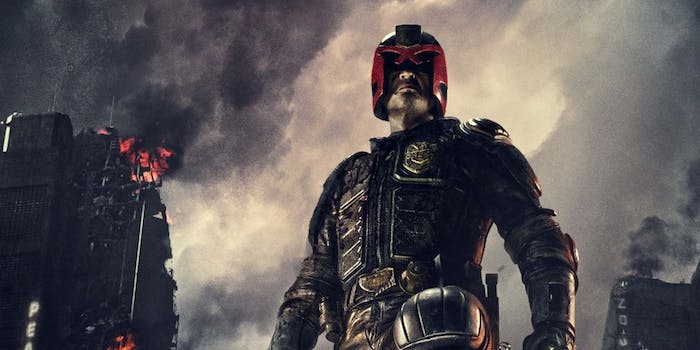 Judge Dredd is getting an online miniseries

It's not a feature film, but it looks promising.

Dredd fans have been campaigning for a sequel for two years, and surprisingly enough, it turns out they’re in luck. A Judge Dredd webseries has just been announced, following last week’s annual Day of Dredd, when fans try to attract social media attention for a sequel.

Before you dismiss this as a disappointing result for people who really wanted a feature-length movie, think again.

The seven-part miniseries is masterminded by Avi Shankar, who produced the 2012 Dredd movie itself. Shankar has a history with this sort of project, having created the fan films Punisher: Dirty Laundry and Venom: Truth in Journalism. The Dredd miniseries will take place in the same “bootleg” universe as Shankar’s two existing fan films, both of which you can watch on YouTube.

The interesting thing about Punisher: Dirty Laundry is that it actually starred Thomas Jane, the actor who played the Punisher in the 2004 feature film. This is good news for fans who are hoping to see more of Dredd stars Karl Urban and Olivia Thirlby, both of whom have spoken several times about their desire to make a sequel.

Shankar’s Dredd webseries has already been filmed, and it’s entirely possible that Urban or Thirlby came back to reprise their roles in secret, even if just for a brief cameo.

The miniseries was announced via Shankar’s YouTube channel, and will be available online next month. It focuses on the Dark Judges, a group of undead villains from the Judge Dredd comics, so it’s likely that Judge Dredd and Judge Anderson (with or without Urban and Thirlby) may not be the main characters this time around. However, it would be a little odd to make a Judge Dredd adaptation without the titular character appearing at all.